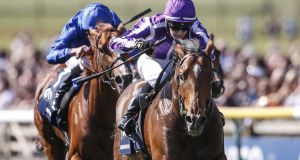 A first Royal Ascot winner is next on Donnacha O’Brien’s checklist in what is turning out to be a landmark season for the 19-year-old rider, although he is keen to play down his chances of a first jockeys championship.

Even though not yet halfway through the season, O’Brien was cut to odds-on favourite for the title at the weekend after taking his tally of Irish winners to 29, a couple ahead of the reigning champion, Colin Keane.

O’Brien’s older brother Joseph was champion in 2012 and 2013 before weight issues ended his riding career. The youngest son of legendary trainer Aidan O’Brien also has to battle the scales and this season could represent a rare opportunity for a family double.

“I think it’s a massive task to win it and I think it’s unlikely. But obviously I’m going to try and ride as many winners as I can regardless of the championship and see where I am closer to the time,” O’Brien said on Monday.

“I’m in front at the minute but in another week I could be five winners behind. It changes so quickly and there’s still a long way to go.

“A lot of the winners at the moment are in maidens which will obviously slow down as the season goes on. Some of the other riders will be able to ride a lot more in handicaps so I need to be doing well at this time of year,” he added.

O’Brien already has two classics under his belt this season courtesy of Saxon Warrior’s 2,000 Guineas success at Newmarket and Forever Together’s victory in the Epsom Oaks.

Next week’s Royal Ascot extravaganza could provide another landmark moment as he tries to win at the world-famous meeting for the first time. Last year O’Brien came agonisingly close on the 66-1 shot Spirit of Valor who came up a neck short of Le Brivido in the Jersey Stakes.

“Ascot is the biggest meeting we have in this part of the world for flat racing. It would be special to get a winner there. I got close last year. But I don’t know yet what I’m riding or how many rides I’ll get,” O’Brien said.

However, the strength in depth of the Ballydoyle team means that his father is a 1-2 favourite to win the Leading Trainer award at Royal Ascot for a ninth time.

O’Brien snr has saddled 61 Royal Ascot winners overall and jointly holds the record of seven winners in a single week alongside the late Sir Henry Cecil. The Irishman saddled half a dozen winners last year.

The focus after Royal Ascot will turn to the €1.5 million Dubai Duty Free Irish Derby at the Curragh, where Saxon Warrior is set to try to bounce back from his odds-on defeat at Epsom.

The Guineas hero could finish only fourth in the derby behind Masar, and hopes remain high that an eagerly anticipated Ballydoyle V Godolphin return clash between the two colts can take place at the Curragh.

Donnacha O’Brien regularly rides Saxon Warrior in his serious work at home and is prepared to forgive his Guineas winner a lacklustre effort at Epsom.

“I don’t think that was his true running. He’s a lot better than that. The big occasion and the track can get to horses,” he said. “You can forgive him one run and hopefully he’ll get back on track at the Curragh.”

Aidan O’Brien has won the Irish Derby a record 12 times but is set to try to win a first French Oaks, the €1 million Prix De Diane, with Happily at Chantilly this Sunday. The dual Group One winner is among 19 left in the classic on Monday.