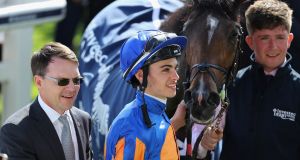 Bookmakers believe Donnacha O’Brien is firmly in the running to complete a notable family double by becoming Ireland’s champion jockey this year.

Quantity rather than quality is the priority for the jockeys championship, though, and Paddy Power reckons O’Brien has that covered too.

Reigning champion Colin Keane is the bookies’ 4-5 favourite to retain the crown and currently tops the table on 24 winners alongside the 2006 title-winner Declan McDonogh (5-2).

However, O’Brien trails by just three winners and, despite a constant battle with weight, is 11-4 to emulate his older brother Joseph who was crowned back-to-back champion in 2012 and 2013.

He is now one of the leading trainers in the country and his support, as well as that of the powerful Ballydoyle team, is evident at Navan on Wednesday.

Donnacha O’Brien rides four for his brother including the prolific Rockfish, and is also on board the likely favourite Gossamer Wings in a juvenile maiden.

The rider was champion apprentice in 2016 with 48 winners and rode 62 winners in Ireland last year.

The focus at the Curragh this Saturday is likely to be on the Listed Silver Stakes and the chances of some relatively unexposed horses earning a ticket to the Dubai Duty Free Irish Derby at the end of the month.

Trading Leather landed the 10-furlong event en route to Derby glory in 2013, and 15 entries remain in it this time.

They include Dermot Weld’s Navan winner Broad Street and the course victor Carlo Biraghi who was also added to the Derby possibles by “Fozzy” Stack at the second-entry stage.

Weld has already ruled out his Epsom fifth Hazapour from the €1.5 million Curragh classic and plans to drop back to a mile and a quarter with the colt.

“We’ll let him take his chance. We think he’ll like a step up to a mile and a half and will love the good ground,” Halford said on Tuesday.

England face up to sterner test as Pakistan enter the bubble 06:00
Nhat Nguyen rallies round his family as dreams put on hold for now 06:00
RG Snyman primed for hectic run with Munster and South Africa 06:00
Sporting Cathedrals: History and tradition palpable at St Andrews, the Home of Golf 06:00
‘A win like that is special and one we’ll remember forever’ - Ireland skipper Balbirnie 00:03
Here is your handy guide to sport on television this week