Gold Spinner can maintain Colin Keane’s surge to the top 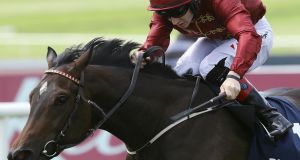 It’s four years since Colin Keane first emerged as a jockey to follow by winning the Galway festival’s day two feature – and victory on Gold Spinner in the same race on Tuesday evening will only cement the growing view that he can be racing’s next big thing.

Rare is the youngster growing up whose racing dreams consist of being a top trainer, owner or breeder. It’s the thought of being on a horse’s back that usually provokes the imagination. So the emergence of a rare riding talent always conjures public excitement.

Keane’s quiet personal response is a world away from Dettori-like flamboyance or the hint of swagger Johnny Murtagh brought to the big day. His public face is more akin to Ryan Moore or Mick Kinane. But the Meath jockey is finding his name increasingly mentioned in such august company.

Dermot Weld’s sub-par season is threatening Pat Smullen’s previously vice-like grip on Ireland’s jockeys’ championship. Keane is the one taking most advantage. He tops the table and is odds-on to go one better than his runner-up position behind Smullen in 2015.

Considering it was only in 2013 that Brendan Brackan won what is now the €120,000 Colm Quinn BMW Mile Handicap, it is a remarkable rise to prominence. Keane was champion apprentice a year later and now threatens to be champion proper. Just as remarkable is that few if any are surprised. And he’s still only 23.

“The thing with Colin is he’s understated, not in your face. He’s young but he knows what he’s about. He keeps his head down and realises you get what you work for in life,” says Ger Lyons, the trainer who has moulded Keane from tyro to table-topper.

That both are in the middle of what could turn out to be their best ever season is hardly coincidence.

Lyons has managed a minor miracle in elbowing his way into the top echelon of perhaps the most competitive training environment in world racing. However, against the might of Aidan O’Brien’s Ballydoyle, dreams of championships are realistically all but impossible.

However a virus playing havoc with another of the sport’s traditional powerhouses has opened the door to his jockey becoming champion.

“Due to someone else’s misfortune [Dermot Weld’s string hit by a virus] we’re in the limelight. But Colin and myself are under no illusions. We’re pushing into a gale-force wind considering what we’re up against.

“I’ll back Colin a million per cent and I must admit I’m getting a tad excited about him winning the championship. But neither of us is going to get carried away. Maybe when he’s double-figures ahead with four weeks to go we’ll start to,” Lyons says.

Over the last two decades Ireland’s jockeys’ championship has been dominated by the triumvirate of Kinane, Murtagh and Smullen, an elite trio to bear comparison with anywhere. Just three others have interrupted that dominance.

Jamie Spencer’s ill-fated year as Ballydoyle number one in 2004 did at least yield an Irish championship. Declan McDonogh sprang a shock in 2006 and Joseph O’Brien thrived on his father’s Ballydoyle ammunition to win back-to-back in 2011-13.

What sets champions apart in any sport is always hard to pin down. At the very top level, talent and dedication can be taken as read. With jockeys especially the most difficult virtue to master can often be the capacity to keep it simple.

“That’s our motto here – keep it simple,” says Lyons. “That’s what the best lads do. It’s what Pat Smullen does and what Johnny Murtagh and Mick Kinane used to do. On the big day they make less mistakes. It’s as simple as that.”

Galway’s unique challenge is far from straightforward for jockeys but Keane proved his Ballybrit credentials on Brendan Brackan and in Gold Spinner he rides the sole three year old in this Tuesday’s highlight.

The classic generation haven’t won the big mile since Palace Star in 2004. It’s hardly a good trend but trends change. Palace Star was the fifth victory in six years for three year olds and what Gold Spinner crucially has is a low draw and a fondness for cut in the ground.

Conditions usually have to be very soft indeed around Galway to negate the impact of a high draw. Lyons describes a stall 18 location for Gold Spinner’s stable companion Tony The Gent as a nightmare.

Qatar Racing’s principal focus this week is on their Goodwood sponsorship but they can span the festivals if Gold Spinner thrives for a drop back in trip and beats the older horses under his potential young champion.

Keane has three other Tuesday rides including the Lyons-trained Daliyah in a competitive juvenile fillies maiden. Ballydoyle’s representative Sizzling could be tough to beat in this though under Donnacha O’Brien, another champion apprentice now in the top five in the table proper.

Jockey’s fortunes can be fickle however as Bryan Cooper will probably appreciate more than most considering his only ride on Day Two is on the Michael O’Leary-owned Cinema de Quartier.

The easy Kilbeggan winner contests an opening novice hurdle which underlines yet again the quality of some of the festival action. Last year’s St Leger third Housesofparliament tries to make it third time lucky over flights and the JP McManus will keep their fingers crossed it doesn’t rain too much.

Bamako Moriviere only made it as far as the sixth on his chase debut at Killbeggan but Ruby Walsh keeps the faith in the Beginners.