O’Brien withdraws Churchill before race due to ‘extreme conditions’ 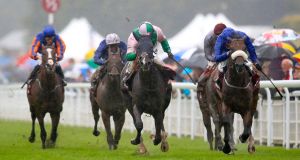 If joy was an understandable emotion for the connections of Wednesday’s shock 20-1 Qatar Sussex Stakes winner Here Comes When, Aidan O’Brien was left with the satisfaction of again appearing to have his judgement vindicated in taking Churchill out of the race.

Shortly before the race the champion trainer withdrew the dual-Guineas winner from a clash with Godolphin’s Ribchester, citing “extreme” ground conditions as persistent rain fell at Goodwood.

It left Ribchester to start an 8-13 favourite, but it there was a sense of anti-climax due to Churchill’s absence it was quickly followed by surprise at how his jockey William Buick went about trying to land the odds.

Ribchester had a pacemaker in Toscanini, but Buick quickly sent his triple Group One winning colt into the lead, setting the tempo on ground officially described as soft.

By the two furlong pole Ribchester looked set to be swamped as Zelzal poked up his inside on the stands rail, while Lightening Spear and the winner challenged on his outer. Buick looked to ease his effort a little but the odds-on favourite rallied and gained to within a neck of the winner at the line.

“William felt he was dropping away and then he came back again,” said Ribchester’s trainer Richard Fahey. “It’s extreme conditions out there. I was very worried. It’s not for a flat horse to be racing on. It’s for National Hunt horses. But he’s run a mighty race and we live to fight another day.”

The same thought was on O’Brien’s mind. He left Churchill’s stable companion Lancaster Bomber to take his chance but he beat only one home. Instead the focus was on where Churchill will appear next.

“There are other races coming up for him. It depends if the lads [Coolmore Stud owners] want to stay at a mile or step him up to a mile and a quarter.

“If he stays at a mile he will go to France [Prix Jacques Le Marois]. If he steps up he will go for the Juddmonte,” said O’Brien.

The trainer also took out his two-year-old Battle Of Jericho from the Group Three Molecomb Stakes won by Havanna Grey.

In contrast, the wet conditions saw Andrew Balding’s decision to supplement the seven-year-old gelding Here Comes When pay off in style.

“Fair play to Andrew and Dr Hay [owner] for supplementing him. It was a brave shout, and it’s really paid off,” said jockey Jim Crowley.

“He’s always been a very good horse on soft ground. I thought he’d definitely be in the first three. He got a nice tow into the race and the weather has played to his strengths. It’s heavy and he loves it.”