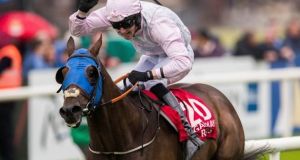 It’s 27 years since Athy Spirit managed it on his own in the same week. Going further back to 1975 and Spanner won the flat race plus a division of the big hurdle. Double Default won the other division. Three years later that horse landed the amateur event.

However, when Swamp Fox returns to action just three days after finding only Whiskey Sour too good in his defence of Monday’s big race the accomplishment of another legendary Galway festival name will be in his sights.

Ticonderoga famously won the amateur race under a 15-year-old Dermot Weld in 1964. A year later he was back to win the Galway Hurdle.

Swamp Fox won the Connacht Hotel Handicap in great style last year and now switches that proven “Galway factor” to the jumps for a first time at Ballybrit.

Appropriately enough there are plenty other historical angles to a race over a century old. Topweight Clondaw Warrior has first-time blinkers on in an attempt to become just the fourth horse to successfully defend the Galway Hurdle crown.

The 2014 hero Thomas Edison is back for another crack at it too as part of a strong JP McManus team which sees the owner with seven declared runners among the 20-strong field and a first reserve to boot in All The Answers.

Finding the Galway Hurdle answer is an annual challenge that defies most statistical trends. Three favourites have won in the last decade but thrown in there too are a pair of 20-1 winners – Moon Dice and Bahrain Storm – that didn’t emerge from powerhouse camps.

Back-to-back victories with Rebel Fitz and Missunited (2012-13) for Mick Winters only added to the sense this race can present a lucrative “little guy” opportunity, as well as serving up two winners who seem obvious in hindsight terms.

Maybe the number one McManus hope Tigris River will ultimately fall into such a category too. Or maybe hindsight will make the former Melbourne Cup runner-up Max Dynamite seem a standout bet to go one better than his 2015 second to Quick Jack in this race.

Max Dynamite and Clondaw Warrior are just half of Willie Mullins’s team and the champion trainer’s festival form this week means none of them will be discounted.

Mullins’s great rival Gordon Elliott has three hopes as he seeks a first win in the race and Timiyan has been a standard fancy on the run-in to the race since the €470,000 purchase hit form for his new trainer.

nother Elliott hope, Automated, never showed in Monday’s big amateur race but looked to have a major task on his hands anyway from a high draw. That race turned into a slowly run affair hardly ideal for Swamp Fox who the previous year pounced from off the pace to win impressively.

This race is usually run at a frantic tempo that puts an emphasis on slick jumping which might be a worry about one of the four cross-channel hopes, Project Bluebook.

Swamp Fox has won his last two over flights and although at a career high ratings-wise he does have Barry Browne’s valuable 7lb claim. If Monday’s exertions haven’t taken too much out of him, Joe Murphy’s stalwart can pull off a rare festival double.

Pat Smullen had been pencilled in for the Group One Nassau Stakes ride on Shutter Speed but torrential rain at Goodwood means she won’t line up and the champion jockey stays in Galway where Raymonda runs for Dermot Weld in the Listed Corrib Stakes.

A lot of the fancied ones are drawn high in the seven furlong event which has 16 searching for valuable black type. Drumfad Bay is already a Listed winner from Killarney and can confirm that form with Music Box.

Don’t Touch It is a ratings stand out for the Grade Three novice chase but won’t like too much overnight rain. The four-year-old Landofhopeandglory gets 18lbs from Townshend but the topweight has looked a notably proficient jumper in his last two starts and can defy the figures.

His stable companion Lac Kivu was impressive on his jumping debut at the end of May and is Ruby Walsh’s pick in the novice hurdle.