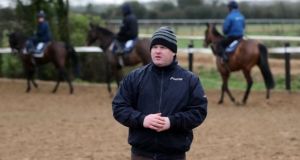 In last year’s renewal Davids Charm started a hugely fancied second favourite to provide Walsh with the most valuable success of his long career.

What transpired indicated how races may not be won at the start but can certainly be lost there.

Walsh recounted later: “I thought they’d all get a fair start and shouldn’t be let go unless they’re all facing the right way, but he was turned backwards.

“He lost 20 lengths and if you have to go on the outside at Galway you might as well stay at home.”

Davids Charm ultimately finished ninth behind Sharjah but he’s back for another crack at the €300,000 highlight which could prove the sweetest result of Walsh’s 57-year training career.

The Doneraile, Co Cork-based handler will be 80 in October. He saddled his first winner back in 1963. Along with Kevin Prendergast, he is Ireland’s longest-serving trainer.

Prendergast (87) came agonisingly close to a career highlight when Madhmoon finished runner-up in June’s Epsom Derby. This Galway Hurdle could represent such a “Derby” moment for Walsh.

If Davids Charm looked to have a first rate chance last year then little appears to have changed in 12 months.

His official mark is actually 1lb lower yet he comes here on the back of a hugely encouraging run on the flat at the Curragh’s Derby Festival when unlucky not to win.

He’s a proven course winner at the 2017 festival and while watered going may be slightly quicker than ideal, Walsh’s small-string looks in form with three of his last four runners either placed or winning.

The difference this time is that Philip Enright is on board rather than Rachael Blackmore who’s on Gordon Elliott’s outsider Tombstone.

Elliott’s main hope of finally breaking his Galway Hurdle duck looks to be Chosen Mate. A Grade Two-winning novice last winter, Davy Russell’s mount tuned up for this with his own encouraging flat effort at Leopardstown recently.

This will be just his sixth racecourse start however and this intensely competitive contest can catch out inexperience.

That may also prove a factor for Joseph O’Brien’s pair, Gardens Of Babylon and Band Of Outlaws.

“The experience of running in a big field handicap at Cheltenham should stand to him, and the faster they go, the better,” O’Brien has maintained.

He memorably won this with Tigris River two years ago but the last four-year-old to win the Galway Hurdle was Perugino Diamond all of 19 years ago.

Willie Mullins is pursuing a fourth Galway Hurdle with four hopefuls. They include the dual-BMW Mile hero Riven Light who had the last of his six jumping starts over two years ago.

No Tag in 1995 was the last Galway Hurdle winner to be trained in Galway and local hopes this time are on the topweight Sole Pretender.

But Davids Charm once again looks to have a lot going for him should fortune favour Walsh this time.

The remarkable Wicklow Brave has his second start over fences in an ultra-competitive looking Grade Three novice chase.

The former Irish Leger and Grade One-winning hurdler took to fences with aplomb at Ballinrobe in May.

Moon Over Germany sets an official 147 standard in this race while Tuesday’s winner Zero Ten has been declared again.

Wicklow Brave’s stable companion Robin de Carlow may be a value alternative to them all though having been impressive in her own two starts over fences.