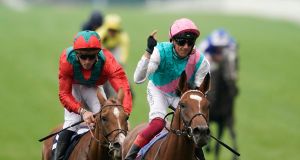 The Galway Races celebrates 150 years this week and even the weather looks like cooperating for much of the coming seven days.

The renowned summer festival wasn’t so fortunate a year ago when wet conditions saw reduced crowd and betting figures.

That continued a recent slide in overall festival attendance levels with last year’s crowd total of 132,691 over 10 per cent down on 2015. However apart from some forecast showers Tuesday morning the outlook for the west this week looks positive.

“Apart from that shower activity it looks like being dry up until Saturday night when something might come from the west. But essentially it’s not a bad week, lovely calm conditions, temperatures of 18 to 20 degrees – occasionally even sun!” said Galway’s clerk of the course, Loran Wyer, on Sunday.

Wyer said he couldn’t rule out having to water the track this week but is pleased with course conditions.

“It may not please everybody but we’re looking to start off on the easy side of good on the flat, and with good jumping ground.

”I’m sure not everyone will agree but we believe it is more comfortable for the participants when it’s on that side rather than the fast side. We’re in a good place ahead of Monday at 5.00,” he added.

Given the landmark 150th celebrations there would be no more appropriate winner on Day One of the festival than Dermot Weld.

The man who has traditionally dominated the festival – with 30 leading trainer awards – has relinquished that supremacy to Willie Mullins in recent years.

His best chance however could be Shekhem who lines up for the two-year-old maiden that Weld traditionally farmed over decades. Considering he blew the start on his Curragh debut Shekhem finished out well behind the Ballydoyle winner Iberia earlier this month.

The latter’s stable companion Innisfree did even better on his Naas debut when runner up to Eye Of The Tiger and may edge it up Galway’s punishing final climb.

The draw won’t have a major impact in that race but seven-furlong handicaps around Galway are often decided by stall position.

Joseph O’Brien’s Fancy Footing has an unfortunate high draw as does O’Brien’s former charge Facethepuckout. The latter has a first start for Michael O’Callaghan since returning from Britain and may prove a major contender. However Billy Lee’s mount Improving looks to be living up to his name and a good break from stall one could prove a major plus.

In other news a decision on whether Saturday’s King George heroine Enable runs again before her Prix de l’Arc de Triomphe date with destiny in October won’t be taken until next week.

John Gosden’s superstar mare secured a ninth Group One success with a titanic defeat of Crystal Ocean on Saturday.

All roads now lead to what would be an unprecedented third Prix victory although whether she runs at York in between is undecided.

“She will tell us. She’s very expressive. She’ll tell us what she wants to do,” reported Gosden on Sunday.

Enable is in both the Yorkshire Oaks and the Juddmonte International, which her owner sponsors, should she run again in August.

“She’s in both races – that would be a later decision. You’re training for the same meeting so that makes it fairly easy. “But I think the key thing is whether she goes to York at all, or whether we just do the other thing, freshen her up – she runs well fresh - and bring her up to the Arc without having taken any risks in going anywhere else,” Gosden added.