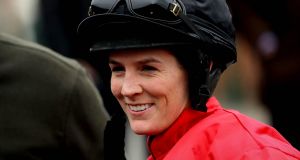 It’s 30 years since Sarah Collen became the only woman to ride the winner of Irish racing’s midsummer steeplechase highlight.

Collen’s achievement on Bold Flyer – a couple of years after her sister Anne trained Randoss to win the Plate – came as an amateur rider.

Since then Nina Carberry and Katie Walsh in particular helped transform racing’s landscape for women while strictly speaking riding as amateurs.

However, Blackmore and Frost have carried that momentum into the professional ranks, making a remarkable impact in recent years, including at Cheltenham in March with Grade One victories.

Galway is Blackmore’s regular stomping ground and she teams up with the lightweight hope Poker Party.

But Ballybrit will be a new test for Frost as the Englishwoman teams up with top-weight Black Corton.

He is one of two runners for British champion trainer Paul Nicholls who conquered the Ballybrit highlight in 2008 with Oslot.

Michael O’Leary’s Gigginstown Stud team have won the Plate in four of the last five years and three of their four chances this time are among Gordon Elliott’s five runners in all.

The McManus team’s second reserve, Movewiththetimes, has also got into the race after Drumcliff came out before Tuesday morning’s deadline.

Whether that earlier reserve cut-off point dilutes the impact of 48-hour declarations for the big race is debatable.

What isn’t is that Wednesday looks a significant date for a prestigious contest that’s been a fixture throughout the Galway Races’ 150-year history.

Moving day three of the festival to an evening date last year didn’t prevent another slip in attendance. Just 16,925 showed up for a famous date that had pulled more than 25,000 a decade before.

The course authorities were unlucky with the weather 12 months ago and better fortune on that score could mean more in terms of better crowds than a €50,000 prize money boost to the big race.

That makes it equal in value to the following day’s Galway Hurdle and represents a significant investment in trying to boost public engagement with a famous handicap which in quality terms has never been healthier.

Black Corton is rated 158 and ran out a thoroughly convincing winner of the Grade Two Oaksey Chase last Spring.

A spin on the flat at Royal Ascot sets him up for what is a major task trying to give up to 23lb away.

Frost’s big race temperament was confirmed in thrilling style at Cheltenham on Frodon in the Ryanair Chase but Galway provides a singular test for any rider new to its idiosyncrasies.

Henry De Bromhead’s charge finished third at the Punchestown festival in the same race the trainer ran both Shanahan’s Turn (2015) and Balko Des Flos (2017) in before they landed the Plate.

Snugsborough Benny brings course-winning form which is always a plus and he could be the one to serve it up to Blackmore’s mount in the closing stages.

Blackmore won a hurdle race on Camlann here in 2016 and the course stalwart is back at Ballybrit for the concluding handicap on Wednesday.

“Shark” Hanlon’s runner ran three times at last year’s festival, winning on his first appearance, only to subsequently lose the race after testing positive for cobalt. That saw Hanlon get a suspended 18-month sentence of his licence.

Camlann warmed up for this with a run at Ballinrobe just over a week ago although he faces a formidable Willie Mullins-trained pair in Scaglietti and Eight And Bob.

Annette Mee’s colours will also be carried in the opening maiden hurdle by Diamond Hill who won the amateur maiden on the corresponding card a year ago.

Four starts over flights since then haven’t provided much encouragement though and Days Without End in just his second hurdle race may be an alternative.

Buildmeupbuttercup’s 94 rating makes a dramatic drop in trip for this week’s amateur maiden look a relative side issue.

1 Tianna Bartoletta: ‘After you’ve gotten your medal, you become black in America again’
2 Timo Werner giving up on Liverpool dream on path to being truly wanted
3 Ian O’Riordan: An education in race and running during college days in America
4 Betting shops face uncertain future as they prepare for Monday reopening
5 Mature Ringrose keeping the ups and downs of rugby life in perspective
Real news has value SUBSCRIBE