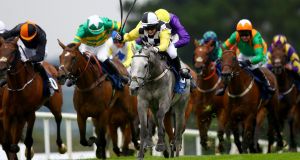 Jody Townend on Great White Shark on the way to winning the The Connacht Hotel Handicap on the opening night of thr Galway Races. Photograph: James Crombie/Inpho

Jody Townend maintained her family connection to the Galway Festival with an emotional success on Great White Shark in the opening day at Ballybrit.

The 21-year-old jockey from Midleton in Cork is the youngest sister of champion jockey Paul Townend who secured his own first big race victory as a teenager here in the 2008 Galway Hurdle.

He has gone on to establish himself at the pinnacle of the jumps game although his sister was quick to point that landing the Connacht Hotel Handicap – Irish racing’s ‘amateur Derby’ – means she will always have one edge over her Gold Cup-winning big brother.

Off a funereal early pace in Monday’s highlight, Townend showed the sort of patience that belied her relative inexperience in having ridden just a handful of winners previously.

Plenty were in with chances out of the dip but as the field came up the final hill, Great White Shark ranged up on the outside to win as a well-backed 8-1 shot. Dalton Highway finished runner-up with the English raider Litterale Ci in third.

It was a third win in a row in the €120,000 feature for Great White Shark’s trainer Willie Mullins who looked hale and hearty on his first racecourse appearance since undergoing a ‘small procedure’ last month.

More than anyone though he wanted to divert attention to the woman of the hour, who sustained anything but a small injury last October and whose return to the saddle at times must at times have seemed anything but inevitable.

“I broke my T12 vertebrae [in a schooling fall]. I had to get six screws and two rods put in, and a stabiliser because the fracture was in my spinal cord,” Townend explained.

“I was supposed to be back in February and when I came back riding out I got awful pains down one side. The back started weeping. I went back and they washed it out but it wasn’t enough. So I had to go back for a third operation and they had to take all the metal out.

“But then the infection was after going into the bone at that stage so I was on a drip for six weeks – but it’s in the past now so I can forget about it!” she added.

In comparison to that Townend made sure-footedly plotting a course through a slowly run 20-runner handicap sound straightforward.

“She can be quite free and she actually wasn’t free when we jumped off. I didn’t want to light her up and Willie said take it handy, wherever I am happy,” she said.

“Coming into the dip we went for a gap and we got murdered so I said we’d go the wide route. Once she got rolling up the hill there was no stopping her,” Townend added.

It was her first winner since her return to race riding earlier in the month.

No one was more impressed than Mullins who pointed to the winning jockey’s determination to ride over fences like her brother.

However, the champion trainer’s suggestion she’s more than capable of riding on the flat too had got some convincing evidence behind it after a winning first spin in a prestigious prize.

“Some guys wait all their lives and never ride the winner. But Jody looked like an old hand,” Mullins said.

“That race is a bit like the Grand National if you don’t get the breaks. Look at our other horse, Mr Adjudicator [9-4 favourite]. He had a slow break, got caught on the rails, never got out and was a fast finishing fourth,” he added.

The 300,000 Guineas purchase Lethal Steps has mostly proved disappointing since moved to jumping but looked much more convincing when landing the opening novice hurdle at 10-1.

“A big engine but he can think about it,” summed up his trainer Gordon Elliott as the grey even overcame interference from a loose horse after the last to ultimately win convincingly.

It didn’t look likely for much of the handicap hurdle but Linger ultimately justified 9-4 favouritism by six lengths under JJ Slevin.

The winner is owned by the Rugby & Racing Syndicate organised by the former Munster and Leicester rugby player Johne Murphy.

“We thought he was well handicapped and we’ve had this race in mind for a while,” trainer Joseph O’Brien said of the ex-‘Shark’ Hanlon-trained runner.

“He’s entered on the flat here on Wednesday and will also be entered over hurdles at the weekend. I’d say there’s a good chance he’ll be coming back,” he added.

O’Brien’s Risk Factor started a 5-4 favourite for the bumper but couldn’t overhaul the pace-forcing Russian Diamond in the closing stages.

Earlier, O’Brien’s brother Donnacha landed 4-9 odds on Ballydoyle’s Innisfree in the juvenile maiden although only by a neck from the persistent runner-up Shekhem.

1 Gerry Thornley: Munster will make for interesting case study when rugby resumes
2 Game Changers: Gary O’Toole took a stand when others turned their heads
3 Georgia and Fiji in line to join Six Nations sides in eight-team tournament
4 Roger Wilson tackling the problem of bad technique in Texas high school football
5 ‘Jack used to call me his official grasshopper keeper. We had a great time’
Real news has value SUBSCRIBE

Mako Vunipola to remain at Saracens despite relegation from Premiership 17:45
It’s not the Ryder Cup without fans - Tiger Woods backs postponement 17:29
Laytown beach races cancel September meeting due to coronavirus 16:24
Racing regulator happy with screening protocols despite high-profile breaches 15:50
McNamara hopeful that Ireland under-20s will get to compete for Grand Slam 15:32
Here is your handy guide to sport on television this week