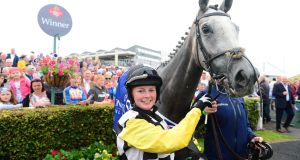 Great White Shark and Jody Townend after winning the Connacht Hotel Handicap during day one of the 2019 Summer Festival at Galway Racecourse. Photo: PA Wire

As Jody Townend rode clear on Great White Shark to win the featured Connacht Hotel Handicap on the opening day of this year’s Galway Festival all was rosy for the 21-year-old on board the 8-1 shot.

However, just 10 months ago all was not so well. While schooling at Willie Mullins yard – for whom she rode the winning mare on Monday – Townend took a fall which would result in a fracture to her spinal cord.

Townend, from Midleton in Cork, is the youngest sister of Cheltenham Gold Cup-winning jockey Paul. She only came back to riding earlier this month and few would have predicted such a quick rise back to the heights of winning Irish racing’s ‘amateur Derby’. In fact, she was quick to point out that even her brother wasn’t too confident. “He had no faith in me. He didn’t even wait for the race and went home!”

After the win, Townend spoke of just how serious her injury was.

“I broke my T12 vertebrae. I had to get six screws and two rods put in, and a stabiliser because the fracture was on my spinal cord,” she said.

“Then I was supposed to be back in February and when I came back riding out I got awful pains down one side. The back started weeping.

“I went back and they washed it out but that wasn’t enough, so I had to go back for a third operation and they had to take all the metal out.

“But then the infection was after going into the bone at that stage, so I was on a drip for six weeks – but it’s in the past now – I can forget about it.”

Townend’s winning record started as early as 2015 when, as a 17-year-old, she rode a winner on her first ride in a point-to-point at Grennan. Three years later she took her first racecourse win on Port Rashid in Tramore and Monday’s victory in Galway was her seventh win of her career.

1 Cam Newton broke the mould: Can his flame be rekindled at the Patriots?
2 Pete Sampras: The forgotten great with the best serve in the business
3 The unsolved mystery of Goran Ivanisevic’s stunning Wimbledon win
4 The Game Changers: Vincent O’Brien, a pioneer who took Irish racing to the world
5 Tipping Point: DeChambeau’s transformation raises questions, but who will ask them?
Real news has value SUBSCRIBE