Donnacha O’Brien aiming to fill in family gap with Numerian 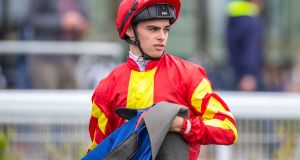 Donnacha O’Brien faces having to waste down to his lowest weight for Galway’s Day Two festival feature although his mount Numerian could make the effort worthwhile.

The lightest the reigning champion jockey has made in the last year is 8.13, the very same his mount for the €120,000 Colm Quinn BMW Mile has to carry.

O’Brien is permanently battling to keep weight off his tall frame anyway so this task will have him existing on very meagre rations.

However, the potential prize is victory in a rare big race that’s proven elusive to his family over the years.

Premier handicaps are hardly Aidan O’Brien’s priority but it is notable that he’s never trained the winner of this. His oldest son Joseph didn’t manage it either during a short but stellar riding career.

Now the latter is set to saddle an unlikely contender in the three-year-old Numerian who remarkably will be having just his second ever start on grass.

He won two of his six starts at Dundalk prior to last month’s Britannia at Royal Ascot when running a fine fifth to Biometric.

Frankie Dettori’s heroics on the day meant most attention was on the runner-up Turgenev so it was easy to overlook how well Numerian ran considering he met serious interference two furlongs out.

The way he finished out after that suggests he could relish the Galway hill and he has a priceless inner draw in stall four.

Numerian is one of a trio of three-year-olds in Tuesday evening’s feature and it’s 15 years since one of the classic generation emerged on top.

O’Brien has got off his father’s Turnberry Isle to team up with Numerian who’ll be the second most inexperienced horse in the race.

If it’s a long time since a three-year-old won the race – formerly known as the “McDonogh” – it’s all of 40 years since the sole cross-channel trained winner, Majestic Nurse.

British racing’s most numerically successful ever trainer, Mark Johnston, makes a rare foray to Ballybrit to try to rectify that with Rufus King.

However the other British hope, Baraweez, has become a Galway stalwart and this will be his 11th start here having run twice at each of the last five festivals.

In 2015 he was runner-up in this race before landing the Ahoonora Handicap five days later. His best other Mile effort was placing third in 2014.

A mark of 88 is the lowest Baraweez has ever been at Galway although at nine his best days may be behind him.

A year ago Riven Light’s stunning performance to win from stall 18 of 18 made a mockery of old Galway prejudice about a high draw being a major negative.

Nevertheless the fancied Saltonstall has hardly been done any favours in box 14, nor has Dermot Weld’s Jassaar in 11.

In contrast Jessica Harrington’s two hopefuls, Marshall Jennings and Onlyhuman, are in the single digits and the red-hot trainer has a first win in the race in her sights too.

Both Harrington runners are more than twice as old as Numerian but the O’Brien brothers will hope he can defy his inexperience.

A year ago Donnacha O’Brien partnered with no less than the subsequent dual-Guineas heroine Hermosa to success in the juvenile fillies maiden.

This time he teams up with the €1.1 million purchase Petite Mustique who can make it third time lucky after a couple of promising runs at Leopardstown.

She had Dermot Weld’s Azila behind her when four to stable companion Love in the last of them and that experience can prove decisive.

Dancing On A Dream’s first run for Harrington since switching from Mark Johnston yielded an encouraging third to Super Treat recently.

First-time cheek-pieces are applied for the seven furlong maiden where the 87 rated Limit Long has an inside draw. On figures Dancing On A Dream has a stiff task but she looks open to more progress than a lot of her rivals.

Galway is important to most owners but few more so than Annette Mee. So Zero Ten will be the focus of a lot of attention in the Beginners Chase.

Emmett Mullins won a bumper with him at last year’s festival and Zero Ten already has a point to point win to his name.