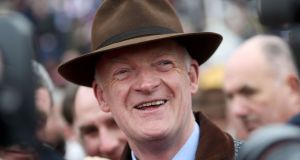 Trainer Willie Mullins: Odds are already as short as 2-7 that he will once again land the festival’s coveted leading trainer award. Photograph: David Davies/PA Wire

The 150th renewal of the world-famous Galway Races starts on Monday evening, and Patrick Mullins is bidding to secure his own significant Ballybrit landmark in the first-day highlight.

The sport’s most successful ever amateur jockey will hope it proves to be a lucky 13th ride in the Connacht Hotel Handicap, known as Irish racing’s Amateur Derby.

Legal Spin is Mullins’s latest attempt to land the €120,000 Day One feature which has proved so elusive to the 11-times champion amateur jockey.

Last year Mullins finally looked like adding the prize to his illustrious CV – only for the hot favourite, Limini, to be overhauled by her stable companion Uradel. That completed back-to-back wins in the race for rider Aubrey McMahon, but also for Willie Mullins, who has taken over Dermot Weld’s “King of Ballybrit” mantle in recent years.

In 2016 jump racing’s champion trainer saddled nine winners from just 20 runners at Galway. He has had a dozen cross-code victories in each of the last two years.

So although his old ally Ruby Walsh won’t be part of the western raiding party this time, Mullins is already as short as 2-7 to once again land the festival’s coveted leading trainer award.

It has already been a year of “firsts” for Mullins, with successes in the Cheltenham Gold Cup and the Irish Grand National. In comparison, an amateur contest run at the height of summer might look like small beer. However, the family resonance of his son finally landing Galway’s historic first big pot of the week shouldn’t be underestimated. Mullins Snr won it himself as a jockey in 1985 on board Pargan. Other top amateurs over the decades have counted it as a notable career highlight.

Mullins jnr has won Grade One races over fences and hurdles as well as in bumpers. He has won amateur derbies at Epsom and the Curragh. He even won the festival’s top prize, the Galway Hurdle, on Sharjah 12 months ago. But failure to win Monday’s race at this stage of his career is not something the 29-year-old rider will like to contemplate.

That is one of the many narrative threads to a landmark festival renewal which features a record €2.3 million in prizemoney spread out over the coming seven days. It includes a €50,000 boost to Wednesday’s Tote Galway Plate which once again will be run on Wednesday evening. That equals the prize fund on offer for the following day’s Guinness Hurdle.

The English-trained Black Corton tops the weights in the Plate and is the likely mount of Grade One-winning rider Bryony Frost.

There is also cross-channel interest in Monday’s big race, with Harry Fry sending Litterale Ci. The mare is one of two JP McManus-owned runners, as Baba Boom, a winner over a mile and a half on this card a year ago, will have his first run in the McManus colours. Derek O’Connor, who won the race in 2003 on Rapid Deployment, takes the mount on Johnny Murtagh’s charge, whose race fitness has to be taken on trust, but the value of course-winning form can hardly be overestimated.

Once again, though, the Mullins team appear set to play a central role. The high-class hurdler Mr Adjudicator has topped betting lists and will have Richie Deegan taking a valuable 5lb off his 10.12st weight.

Patrick Mullins is on Legal Spin and, considering he has done under 11st in the last year, these riding arrangements could be significant.

Mr Adjudicator is attractively weighted on his best hurdles form. But most of that is over 2½ miles, and he was a beaten odds-on favourite behind his stable companion Royal Illusion when switched back to the flat at Bellewstown recently.

Legal Spin, in contrast, is comparatively lightly raced, and returned to action with an encouraging effort at the Curragh on Derby day. He enjoys a weight pull with his rival Shakespear’sgalley on that form.

However, luck in running is once again likely to play a major role in what is always a fiercely competitive handicap. That places a premium on jockeyship, and another proven course winner, Great Trango, won’t want for that. The 2016-17 champion Jamie Codd is another top amateur still to win the big festival prize, and he teams up with Harry Kelly’s blinkered hope. Great Trango warmed up for this with an encouraging spin over hurdles at Cork, and his aggressive racing style could keep him out of any trouble that’s about.

Any duel up the famous hill between Messrs Mullins and Codd would set an auspicious tone for another potentially thrilling week at Ballybrit.