Frankie Dettori lands yet another Group One at Glorious Goodwood 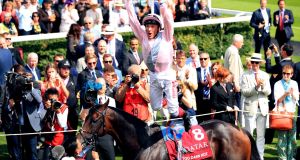 Too Darn Hot continued his resurgence with victory in the Qatar Sussex Stakes at Goodwood on Wednesday.

John Gosden’s Dubawi colt looked every inch a superstar in the making after rounding off an unbeaten juvenile season with victory in the Dewhurst last October, but the early part of his three-year-old campaign did not go to plan.

An early-spring setback ruled him out of a 2000 Guineas trial and ultimately the Classic itself, and subsequent defeats in the Dante, the Irish Guineas and the St James’s Palace Stakes suggested he might not be the force he was as a youngster.

However, having got his season up and running with victory in the Prix Jean Prat at Deauville three and and a half weeks ago, he was a well-backed even-money favourite to follow up in Goodwood’s £1 million feature – and ultimately did so with something to spare.

Phoenix Of Spain dropped away tamely passing the two-furlong marker and while Circus Maximus briefly kicked, Too Darn Hot quickly reeled him in and only had to be pushed out in the dying strides to prevail by half a length.

“Our horse was in tight, but I told Frankie to be patient and he sat and he waited. When the gap came, off he went.”

The Newmarket handler will consider options over a variety of different trips for Too Darn Hot, but views the Breeders’ Cup Mile as the perfect end-of-season target.

He said: “Seven furlongs is probably his best trip, but he gets a nice, flat mile. What caught him out was the stiff mile at the Curragh, when we ran him back too soon after the Dante, and the stiff mile with the rain in the St James’s Palace Stakes. He’s an out-and-out speed horse.

“The Jacques le Marois probably comes a little early, but you’ve got races like the Prix du Moulin and obviously the QEII, but you’ve also got the sprints.

“He’s in the Haydock Sprint Cup and he’ll be put in the sprint on Champions Day at Ascot, but a race I’m really toying with in my mind is the Breeders’ Cup Mile. It’s an oval, flat track on quick ground.

“A good seven-furlong horse loves the mile there [Santa Anita] and that might just be the one to think about more than anything – I think we’ll probably work back from that.”

Sigerson Cup final: Pat Critchley looks to defy the odds against DCU 17:01
Who is Caelan Doris? Meet Ireland’s newest rugby international 15:55
James McClean: ‘if you ask my family they’d prefer Bosnia away’ 15:22
Sene Naoupu: ‘I believe we’re on the verge of something special this season’ 15:00
Catalan Dragons slammed for signing Israel Folau 14:00
Here is your handy guide to sport on television this week