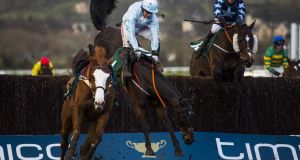 Irish trainers are preparing for the enhanced animal welfare procedures that will be in place at next week’s Cheltenham Festival.

Britain’s racing authorities have put in place a series of measures to try and prevent a repeat of last year’s festival, when seven horses sustained fatal injuries during the four days.

Three of them came in the final race of the festival, the Grand Annual Chase. That race has been moved in the programme for this year and has had its maximum number of runners cut to 20.

A number of recommendations contained in a British Horseracing Authority (BHA) report on the back of the 2018 festival have been carried out ahead of next week, including plans for every horse in every race to be checked by vets before they race. Such checks were made before only four races in 2018.

If a horse is found to be unsuitable to race it won’t be allowed run.

Checks are set to include examinations of an animal’s heartbeat as well as its joints and legs. Horses will also be required to trot in front of a vet to check for any physical problems.

The BHA also has measures in place against the threat of equine influenza, an outbreak of which stopped racing in Britain for six days last month. They include a requirement for the BHA to receive swabs for every runner within 72 hours of a horse running.

Some trainers have privately expressed concern about horses going to Cheltenham and provoking veterinary concern by pulling out stiff even though they’re sound.

At last November’s Breeders’ Cup in America, the French-trained Polydream was prevented from running in the Mile after officials felt she wasn’t trotting properly.

It was a decision her trainer Freddie Head described as a disgrace. He argued she always trotted awkwardly but was perfectly sound.

The Irish Racehorse Trainers’ Association (IRTA) chief executive Michael Grassick said on Monday that racing in another jurisdiction requires abiding by their rules.

“The only thing we’ve asked Cheltenham, through the Irish Horseracing Regulatory Board, is that we don’t want horses trotting in the stable yard there.

“That’s not safe for other horses or people in the yard. And we don’t want horses trotted on a roadway or a firm surface.

“So if any horse is a little bit scratchy they should be able to trot on the grass or on an easy surface,” Grassick said.

“Normally we advise our members that they have with them a letter from their own vet explaining if a horse has an awkward walk, and it’s a normal for the horse to walk like that. That can help,” he added.

The IRTA has expressed concerns about the practical implementation of that 72-hour limit but the requirement remains.

“We’ve no objection to the swabs. The problem is the 72 hours and to have the results before you travel.

“Some smaller yards might have a runner on the first day and on the last day and those horses might travel together. Therefore the 72-hour thing wouldn’t be feasible. But they won’t relent on it,” Grassick said.

In relation to the IHRB’s controversial recent announcement that from next month striking a horse nine times or more with a whip will trigger an automatic stewards enquiry, Grassick warned against discretion being removed from race-day stewards.

“My personal view is that discretion should always be with the stewards. A horse could be winning easily and a jockey could hit it five times when he’s 10-lengths clear and as such he hasn’t broken the rules. But to me that’s wrong,” he said.

“That’s where discretion needs to be there for stewards on the day. A jockey could be flicking a horse rather than hitting it. So discretion is necessary. It’s not black and white,” Grassick added.

1 Nicholas Quinn: ‘Swimming became how I dealt with grief’
2 Reality Bites – Tales from the new normal: Caitríona Cormican
3 A beautiful, happy accident - Moneyball is the best sports movie ever
4 James McClean still failing to learn his own online history lesson
5 Ian O’Riordan: The aloneness of the long-distance rider
Real news has value SUBSCRIBE