The media-shy trainer of Presenting Percy has become the story 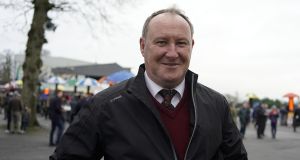 Galway trainer Pat Kelly. Success at Cheltenham for the last three years from a small stable in the west of Ireland has seen Kelly regularly accused of genius. Photograph: Alan Crowhurst/Getty Images

Presenting Percy is present and correct for the Magners Cheltenham Gold Cup. Come 3.30pm on Friday afternoon it might do to check to make sure the favourite’s trainer Pat Kelly is too.

Considering the ridiculous focus on him, it would be hard to blame Kelly if he chose to skip it all.

The subject of whether the famously private Co Galway trainer talks to media if Presenting Percy wins has become a stupidly inflated sideshow that threatens to overshadow a potentially career-defining moment.

Kelly rarely does interviews, certainly not lengthy ones of the type that some seem to believe are a duty for someone tasked with the job of saddling a Gold Cup favourite.

The self-regard inherent in such an attitude has not prevented one bookmaker chain offering odds on whether or not Kelly is going to perform on cue in front of a camera.

The result is the less than edifying prospect of a trainer getting trailed by hack-pack in a media game apparently no one’s allowed not play anymore.

In the wider context it is always ultimately in racing’s best interests if its leading figures do play ball in the profile game. The sport is lucky that many trainers and jockeys do so. Some enthusiastically use the opportunity to promote themselves.

Even if the product often varies little from fluent clichéd expressions of hoping for the best, other sports aren’t near as lucky in access terms. While that might not be faithful to higher ambitions for authenticity it at least fills space and time in an incessant digital age.

Maybe that’s behind indignation at Kelly’s dogged refusal to play the game. Or maybe some really do believe there’s some duty involved in training a top horse.

But even allowing for public curiosity it’s hardly professional betrayal to wonder what things have come to when someone can’t decide for themselves who and who they don’t want to speak to.

The maddeningly contrary part from Kelly’s point of view is that the more he stays “shtum” the greater the fascination gets.

With nothing else to work with the mystery has become the story, producing tales of near-mystic powers of horsemanship in the fields of Athenry. Success at Cheltenham for the last three years from a small stable in the west of Ireland has seen Kelly regularly accused of genius.

Presenting Percy’s unorthodox preparation for last year’s RSA only added to the tale. If the horse can land steeplechasing’s greatest prize having not raced over fences since then horse-whisperer puns will be at a premium.

So it’s something of a relief to hear the man himself is probably immune to all of it.

“None of this will bother Pat a jot one way or the other. Pat does his thing, always did. He has his own ideas, has stuck by them and that’s just him,” says Conor O’Dwyer, who rode for Kelly during his glittering career as a jockey.

“He’s a quiet, clever fella. He wants to be left alone, stay down in Galway and do this thing. That was always Pat.

“Knowing him I doubt he thinks about this either way. Pat gets up in the morning, Presenting Percy is his baby, he deals with Philip Reynolds [owner] and that’s it,” says O’Dwyer.

Painting a reclusive picture appears to be a distortion of the reality. Reynolds has stepped into the limelight in terms of providing updates on Presenting Percy. It allows a shy individual particularly good at his job, and who simply values his privacy, to get on with it.

Reynolds is in awe of his trainer’s horsemanship, and the owner realises Kelly is very much his own man.

“It would be better if Pat would speak and give people an insight into how much of a genius he is,” he said recently. “I think he’d do a lot better off the back of that, to be honest. But he doesn’t want to. We’re all different, and I think we should respect that.”

There are questions that can be legitimately put to Kelly, not least the circumstances of his €1,000 fine after a point-to-point winner he trained tested positive for the prohibited race-day substance cobalt last year.

Kelly appeared to be absolved of responsibility as the Irish Horseracing Regulatory Board could not establish the source of the substance. The IHRB accepted Kelly’s assurance he had not administered anything. Yet as the licence holder he carried the can.

The flip-side is the nature of the job also means getting the glory when things go right. What’s different about Kelly, maybe even refreshingly so, is that he does not seem interested in the public element of that, even in the rarefied atmosphere of a Gold Cup.

If steeplechasing’s “blue riband” is won by a superstar athlete from a 20-horse yard in the west of Ireland it will be a story for the ages. And, of course, it would only add to the story if his trainer outlined just how he did it.

But if he chooses not to its surely a poor lookout all around if a little difference can’t be accommodated.