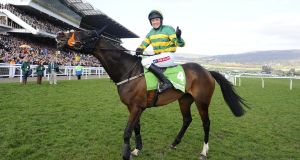 The JP McManus-owned Jezki will not be travelling to Cheltenham this year. Photograph: Alan Crowhurst/Getty Images

JP McManus has removed three handicap contenders from his Cheltenham team but remains an odds-on favourite to beat his rival Michael O’Leary to next week’s leading owner award at the festival.

The award has been in place for the last two years and the Ryanair boss has emerged on top both times, including when winning seven times in 2018.That brought O’Leary’s overall festival haul to 26 winners.

It won’t though include the trio of De Name Escapes Me, who had been originally been pointed at the Coral Cup, or the former festival winners Jezki and Ivanovich Gorbatov.

The McManus team are unhappy with the way all three have been treated by the cross-channel handicapper in relation to other Irish horses.

Ivanovich Gorbatov, a former Triumph hero, had been among the fancies for the County Hurdle, while the former Champion Hurdle winner Jezki had had a choice of the County or the Coral Cup.

Nevertheless with other ante-post favourites such as Defi Du Seuil (JLT) and Champ (Ballymore Novice Hurdle) in contention McManus is still a 4-7 shot in some ante-post lists to be top owner.

Buveur D’Air will have back-up in the Champion Hurdle from McManus’s other contender, Epsoir D’allen.

The Gavin Cromwell-trained five year old pleased connections in a weekend workout and will take his chance under jockey Mark Walsh.

“It’s a huge step but I think he’s quite entitled to go there. Hopefully he can perform on the day,” said Cromwell.

“I think he stays well and the hill should play to his benefit. I don’t think the track is going to be a problem. It’s fantastic to have a runner in Cheltenham, especially in one of the championship races,” Cromwell added on Monday.

1 Unanimous or unfair? Opinions divided on Sam Bennett’s Vuelta relegation
2 Ronan O’Gara: Ireland need to be braver than usual ‘in a shoot-out for gold’
3 Jackie Tyrrell: We’ve got the championship back. But where’s the physicality?
4 Ireland can treat fans to some tricks on Halloween night in Paris
5 Six Nations - France v Ireland: Kick-off time, TV details, permutations, team news and more
Real news has value SUBSCRIBE