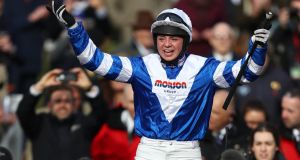 Scepticism is too often necessary when observing elite sport, but at Cheltenham on Thursday it got overwhelmed in a wonderful sea of sentiment.

Paisley Park, the 11-8 favourite owned by Andrew Gemmell, a former trade union official who has been blind since birth, ran out a superb winner of the Sun Racing Stayers Hurdle.

Just 40 minutes previously, racing’s emotional Richter scale threatened to collapse in a heap after Bryony Frost became the first woman to ride a Grade One winner over jumps at the Cheltenham festival.

The charismatic 23-year-old Englishwoman guided Frodon to an all-the-way Ryanair Chase success that provoked rare scenes of communal joy at a single result.

Frodon rallied when seemingly beaten after the last to overhaul the 33-1 outsider Aso, with the Irish hope Road To Respect in third. There was admiration for a brave horse afterwards, combined with overwhelming affection for his rider.

Frost’s famously open attitude and uncomplicated delight at the professional life she has carved out for herself has made her massively popular.

That in itself is no mean achievement when the racing public in particular is as famous for its scepticism as its capacity for identifying the faintest hint of the inauthentic.

Having celebrated her 100th winner at lowly Plumpton on Monday with characteristic enthusiasm, the implications of the greatest success of her career just four days later seemed briefly to overwhelm her.

The immediate TV interview after any race or match is often derided as an exchange of clichés. But Frost’s delivered a glorious dividend in raw and unabashed joy.

“When he got overtaken two out, most horses would quit. But he grabbed me by the hands and said ‘don’t you dare give up, don’t you dare not send me into the last. I want this more than you, now come on!” she said.

“He is the perfection of determination. Look at what he’s done there and tell me he doesn’t love racing. The dream he’s just made come true for me is incredible.”

In the circumstances it was a superbly fluent advertisement for the depths of emotion this most self-consciously tough of sports can generate.

Frost appears to have embraced the PR role that has been thrust upon her yet managed the rare feat of remaining spontaneous enough to make it feel unaffected.

It was a 26th festival victory overall for female riders. With Rachael Blackmore having won here on Tuesday, it’s possible that last year’s haul of four winners for women jockeys might be bettered this week.

But after the initial euphoria had died down, Frost’s eloquence extended to pointing out how such distinctions are becoming increasingly old hat.

“I live by that metaphor – if you look at the top of the mountain, it’s a very, very long way up and sometimes it’s daunting. When I was kid, and if I looked at this point now, I never would have believed it. I just kept my eyes on the floor and kept making sure I was going uphill. As long as you’re doing that, then good luck and keep kicking.”

It’s the sort of sentiment which Andrew Gemmell endorsed by his very presence in the Stayers Hurdle winners’ enclosure.

The Englishman’s enthusiasm for the sport had been infectious on the run-in to the day three championship highlight, and his horse delivered in style.

It had been 10 years since Paisley Park’s Co Cork-born jockey Aidan Coleman rode his only previous festival winner. But the 30-year-old from Innishannon delivered a ride of supreme cool and intelligence when it mattered most, delivering Paisley Park from well back to sweep past Sam Spinner and the gallant veteran Faugheen.

Even an awkward leap at the last could not halt his momentum, and the way Paisley Park bounded up the hill with his ears pricked suggests he may yet join the list of multiple winners of this race.

“Coming here today I couldn’t see Paisley Park getting beat. I haven’t had these winners at the festival, so I thought I’d better calm down a bit!” Coleman said afterwards.

Having famously elected not to ride the 100-1 Grand National winner Mon Mome in 2009, it was a big-race win to savour for Coleman. His thoughts, though, were elsewhere crossing the line.

“My first thought was when my best friend Campbell Gillies [the 21-year-old jockey who died in a swimming pool accident in 2012 aged just 21] had his best day here a few years ago. I just want his family to know that although he died a few years ago now, he’s always there in our hearts.”

It was a notably stylish sentiment on a remarkable day.