Samcro could prove to be a St Stephen’s Day spoilsport 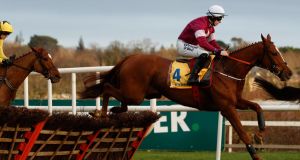 Samcro at Leopardstown. He will bring plenty of “star-power” to the €100,000 feature of day one at Limerick. Photograph: James Crombie/Inpho

A 10th career Grade One victory for Faugheen could bring the house down at Limerick, although Samcro may ultimately prove a St Stephen’s Day spoilsport.

The clash between the pair in the Matchbook Exchange Novice Chase promises to be one of the highlights of the entire Christmas festival programme. Both horses are major names in racing and bring plenty of “star-power” to the €100,000 feature of day one at Limerick.

Faugheen returns to the track where he won over three miles at the 2013 Christmas festival, a performance that barely hinted at what was to come. At his peak the horse labelled “the machine” seemed to win with mechanical regularity, a 2015 Champion Hurdle victory among a memorable unbeaten run of 10 races.

When Nichols Canyon eventually shocked Faugheen, the response was a brilliant Christmas Hurdle victory at Kempton, followed by a record 15-length Irish Champion Hurdle success to rank with any performance seen over flights in modern times.

Sadly nearly two subsequent years on the injury sidelines meant that a peak-form Faugheen was never seen again, although his impression on the racing consciousness was imprinted. Retirement beckoned at the end of the 2018 season only for a resounding Stayers triumph at Punchestown.

Not many, however, could have anticipated Willie Mullins sending his veteran stalwart over fences this term. So on the verge of officially turning 12, Faugheen lines up for a Grade One over fences having won his single chase start at Punchestown last month.

He does so against a rival once acclaimed by no less than Davy Russell as being “as good a horse as we will ever see”.

It is hardly Samcro’s fault he has not lived up to such billing. The fact it didn’t seem too “OTT” during his novice hurdle career indicated a major talent. The hope is now he can rejuvenate that career over fences.

His debut was faultless, and if subsequently trying to match Fakir d’Oudairies for jumping saw him crash out in the Drinmore then the consolation for fans was that he still had not been asked a major question at the time.

With “Fakir” lining up at Leopardstown, the tempo on very testing ground may not be as ferocious, which could allow Jack Kennedy get Samcro into a smooth rhythm.

Patrick Mullins teams up with Faugheen for the first time since winning a bumper on him in May of 2013. The champion amateur has repeatedly proven himself at Grade One level against top professionals, but even he will be aware of the expectation surrounding a potential classic head-to-head.

Castlebrook looks best of the five others, but ultimately this could be one for the horse with potentially his best days still ahead of him.

It’s all hands on deck for the Mullins team over the busiest day of the racing year, and Mullins also comes in for the ride on Unexpected in an earlier hurdle.

JP McManus’s runner was impressive on his Irish debut at Fairyhouse last month, and is a general 10-1 shot for the Supreme at Cheltenham in March.

Great Field’s half-brother will need to beat Easywork and Discorama with authority to justify those quotes, and he is stepping up to the 2½ miles.

Dreamingandhoping belied 66-1 odds on her debut when runner-up to Bigbadandbeautiful at Navan. A repeat of that will make her hard to beat in the bumper, while Bajan Excell was a winner here on heavy ground on the flat and can follow up in the opener.

Later Young Dev has his first handicap start over fences. The trip may be short of his best, but he does look on a good mark based on his recent course hurdles victory.