Ballydoyle’s resources at full stretch around the globe 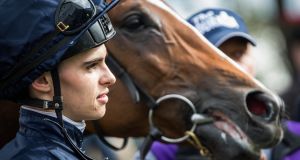 Donnacha O’Brien: has claimed five Group One wins this year and is assured of being crowned champion jockey in Ireland for the first time with 103 winners already in the bag. Photograph: Ryan Byrne/Inpho

Newmarket has hosted some of Donnacha O’Brien’s finest moments during a stellar 2018 campaign and the champion jockey-elect is in line to try and add to the list there later this week.

Ballydoyle’s big race resources are stretched around the globe at the weekend which could once again work to O’Brien’s benefit.

The 20-year-old rider enjoyed a Group One double aboard Ten Sovereigns and Fairyland at Newmarket less than two weeks ago when Ryan Moore travelled to New York to ride Mendelssohn at Belmont Park.

This time Moore is en route to Sydney to team up with US Navy Flag in the $13 million Everest race at Randwick in the early hours of Saturday morning.

Aidan O’Brien’s reach also extends to Melbourne on Saturday as Ireland’s champion trainer plans to run five horses at the Caulfield track, including last year’s Derby runner-up Cliffs Of Moher in the Group One Caulfield Stakes.

A trio of O’Brien sprinters – Fleet Review, Intelligence Cross and Spirit Of Valor – will also take their chance in the Group Two Schillaci Stakes over five and a half furlongs.

However O’Brien’s principal focus ‘Down Under’ is on the world’s richest turf race where US Navy Flag will break from a favourable stall three in the hugely lucrative ‘Everest’.

“It sounds like a good draw. I don’t know much about it [Randwick] but it is a round, right-handed track and everyone seems to be happy,” Ireland’s champion trainer said on Tuesday.

“The only worry is they’re getting a lot of rain and the ground couldn’t be fast enough or good enough for him,” O’Brien added.

US Navy Flag’s draw, plus Moore travelling to team up with him, appears to have encouraged punters who cut the July Cup winner to 6-1. Last year’s winner Redzel, and Vega Magic are among the leading home contenders.

Before that however there are Group One matters closer to home and O’Brien Snr is putting the finishing touches to running plans for Friday’s bet365 Fillies Mile as well as Saturday’s Darley Dewhurst Stakes a day later.

“We could run at least two in the Fillies Mile, Zagitova and Hermosa, the filly who won in Naas,” he said. “We haven’t decided about the Dewhurst yet but Anthony Van Dyck, Christmas, Ten Sovereigns and Mohawk are being considered.”

The breadth of Ballydoyle’s global commitments means something of a logistical headache in terms of jockey arrangements with riding plans also having to cover the Stakes action scheduled in Ireland this weekend at Limerick and Navan.

“Donnacha and Seamus [Heffernan] will be in Newmarket and Wayne [Lordan] will be here,” O’Brien said.

The champion trainer’s youngest son proved once again his mastery of Newmarket’s Rowley Mile when Ten Sovereigns won the Middle Park and Fairyland landed the Cheveley Park ten days ago.

They added to Saxon Warrior’s 2,000 Guineas triumph in May and brought O’Brien’s Group One haul for the year to five. He is also assured of being crowned champion jockey in Ireland for the first time with 103 winners already in the bag and prizemoney of over €3.2 million secured.

The in-form rider will be in Cork on Wednesday for four rides including North Face for his father in the featured Listed Navigation Stakes.

North Face only made his debut last month when successful at Navan and is joined in the eight-runner field by Moteo who has also won her sole start to date.

In contrast it will be a 13th start of the season for Ship Of Dreams who hasn’t been able to win since her maiden success at the start of January.

The quick going will be very different from when she ran a Group Three fourth to Broadway recently although persistence could finally pay off for the Qatar Racing filly in terms of finally securing a winning black-type bracket this time.

Her stable companion Cosmic Horizon, owned by the Ireland rugby coach, Joe Schmidt, has to concede weight all-round in the Nursery although the concession to Lady Marengo could be too much.

Different Strokes: Frankie leaves Fleetwood for Hollywood 10:00
Dan Carter to return to Christchurch as an Auckland Blues player 08:08
Ralf Rangnick named new Milan boss for 2020-21 07:54
Spurs edge past Everton, Ireland’s clubs have a key role to play in rugby’s return 07:44
José Mourinho: Half-time row between Son and Lloris was ‘beautiful’ 07:56
Here is your handy guide to sport on television this week