Altior gets back to winning ways with Newbury success 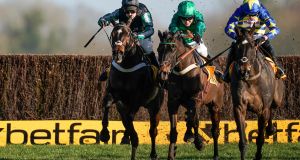 Altior resumed winning ways in the Win Bigger On The Betfair Exchange Chase at Newbury.

His 19-race winning run had come to an end last time out against Cyrname in November, when stepped up in trip at Ascot, and then Nicky Henderson’s superstar subsequently missed an outing at Christmas with an abscess.

The returning Dynamite Dollars set the pace after Bun Doran fell at the water jump, and plenty looked to have a chance at the third-last in the Grade Two feature.

Nico de Boinville had to get serious on the 1-3 favourite running to the final fence, but on landing his famed turbo kicked in and he sprinted clear to win by three and a quarter lengths, taking the race better known as the Game Spirit for a third time.

Henderson said: “We’ve had a few hiccups along the way, but we’re getting there.

“He was keen early and enjoying himself. He took a blow just before the second-last, but what he really liked was the way he put it to bed – the gears are still there.”

Bookmakers trimmed Altior a touch for the Queen Mother Champion Chase, and Henderson added: “He’s only in one race [at Cheltenham], so we don’t have to question what we are doing.

“There is improvement to come and he [De Boinville] said he will come on a lot for it. As much as anything it will have done his confidence the world of good.

“It was not nice at Ascot and it took a lot of getting over to be honest with you, and Nico said today would have done him the world of good. His jumping and everything just gained in confidence all the way. It was just a matter of when he pressed the button and let him go and he was good.

“We know what we have got to do between now and then [Cheltenham] just keep the ball rolling. He takes plenty of work, he has had a nice race it has done him the world of good.

“He has been more flamboyant than that, but I’m just tinkering with minor details really.

“There is no doubt we were under pressure today. I’ve got to say I was fairly confident, but on the other hand you are ready to take what you have to take and that is what racing is all about and you have to face these things when they go wrong.

“It is nice it is done and he goes in there to try to retain his crown.”

“Ascot was a mistake all round and it wasn’t his scene. It was just bad luck. He was back on his ground today and has had a lovely time.

“He is a good horse and always has been a very good horse. I think it is lining up to be a very competitive Queen Mother, I really do.”