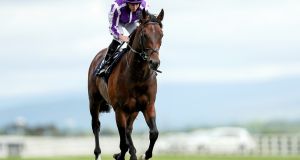 After his Newmarket classic success Magna Grecia proved a bitter disappointment when out of the money in the Irish Guineas at the Curragh.

However the Invincible Spirit colt was subsequently found to have pulled a hamstring and a provisional plan for him to return to action in the St James’s Palace Stakes was outlined.

On Monday though O’Brien cast doubt on Magna Grecia making that race for which he’s currently a 6-1 third favourite behind Phoenix Of Spain and Too Darn Hot.

“At this stage I don’t think he’s going to make Ascot. He pulled a hamstring in the Guineas. It’s responding but maybe not quick enough. If you asked me now (about Ascot) I’d say probably not.

“It’s just taking its time. It can be slow sometimes. It either responds very quickly or it takes its time, these hamstrings.

“Obviously if he doesn’t make it we’ll try and get him right again . Obviously there’s Goodwood (Susses Stakes) there,” he said.

Before next week’s Royal Ascot action, O’Brien may try to maintain his impressive 2019 classic tempo in this Sunday’s French Oaks at Chantilly.

He has left a handful of fillies in the €1 million Prix de Diane including the Epsom Oaks runner up Pink Dogwood.

She however appears more likely to wait for the Group One Pretty Polly Stakes at the Curragh later this month leaving Coral Beach as the most likely Ballydoyle standard bearer at Chantilly.

She was eighth to Hermosa at the Curragh, a position she also filled in the French 1,000 Guineas prior to that.

“If we decide to step her up in trip Coral Beach is a possible. Just Wonderful could also step up in trip. But whether she goes with the other filly (Hermosa) to the Coronation we’ll see in a day or two.

The other possible is Fleeting (third in Epsom Oaks) but we have it in our heads she might go for the Ribblesdale. She has to be supplemented but we’ll see,” O’Brien said.

The Diane represents a rare blank on O’Brien’s classic CV and no Irish trained filly has won the race since Seamus McGrath’s Sweet Mimosa in 1970.

Joseph O’Brien has also left his Group One winning filly Iridessa among the 22 entries still left in Sunday’s classic.

It is Aidan O’Brien who has been installed a red-hot 4-7 favourite to again land the leading trainer award at next week’s Royal Ascot extravaganza.

Even in Magna Grecia’s likely absence the Ballydoyle trainer can boast a star-studded team that as well as Hermosa also includes the warm Commonwealth Cup favourite Ten Sovereigns.

A strong juvenile squad could be led by Arizona who has been backed into 5-1 favouritism for the Coventry Stakes on Day One.