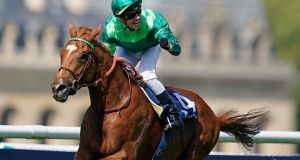 Cristian Demuro brought the Jean-Claude Rouget-trained colt to challenge the hot favourite in the final furlong.

Persian King had every chance of following up his victory in the French 2000 Guineas when taking the lead from Motamarris in the straight, but he just ran out of stamina in the closing stages.

Sottsas (10-1) came out of the pack to lay down the challenge to Andre Fabre’s Classic winner and asserted in the final 100 metres to score by two lengths, giving Rouget a fourth French Derby triumph.

Sottsas was given a quote of 16-1 for the Prix de l’Arc de Triomphe with Betfair.