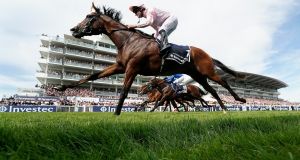 A 22-year long French Derby blank never looked like ending at Chantilly as Cape Of Good Hope did best of the Irish trainer’s three runners in fourth behind the 14-1 winner Sottsass .

Jean Claude Rouget’s chestnut colt looked no one’s idea of a donkey by decisively running down the favourite King Persian with Motamarris third in an all-French finish that saw the track record broken.

Cape Of Good Hope stayed on into fourth while Mohawk was seventh and Blenheim Palace, ridden by the Epsom hero, Seamus Heffernan, faded to the back after cutting out the early running.

It will be a first Dubai Duty Free Irish Derby at the revamped Curragh and already shapes as a prime opportunity for O’Brien to win Ireland’s premier classic for a 13th time.

Sottsass could follow the trend of many recent French Derby winners and skip the Curragh although his rider on Sunday, Christian Demuro, is in no doubt of the colt’s quality.

“This is a really special victory for me because I wasn’t originally down to ride the horse. I got the ride because the Aga Khan decided to run Zarkallani and Christophe Soumillon was under contract so Jean Claude Rouget called me up,” said Demuro.

“He was a bit lit up in the parade but once behind the stalls he was nice and calm. King Persian took me deep into the race and one furlong out I knew I had the beating of him,” he added.

Many Curragh-based fingers are likely to be kept firmly crossed that Saturday’s gallant runner-up Madhmoon again pitches up to take on the might of Ballydoyle.

Kevin Prendergast’s star prevented what would have been an unprecedented first five clean-sweep for O’Brien at Epsom and Japan, Broome, Sir Dragonet and Circus Maximus all look to remain in the Curragh picture.

Prendergast hasn’t ruled out a tilt at the Irish Derby after coming up just half a length short of Anthony Van Dyck the day previously.

“We haven’t made any definite plans yet. From a mile and a quarter to a mile and a half he seems okay. It’s all wide open to him,” he said on Sunday.

“When we talk to the owner [Sheikh Hamdan] we’ll set out a plan,” added the popular 86-year-old local trainer who has yet to win his home Derby.

It was once again O’Brien’s day at Epsom however and given the strength of the Coolmore-Ballydoyle team it looks all but inevitable the 49-year-old will eventually score a record-breaking eighth Derby. But typically though the Irishman was presuming nothing.

“I know how tough a race this is,” he said “The boss [John Magnier] always says the Derby is the Holy Grail and it is the backbone of the thoroughbred. This is the ultimate test. You don’t know what horse is going to handle the track, the preliminaries, whether they will have the stamina.”

It’s back to the office for Seamus Heffernan on Bank Holiday Monday with five rides at Gowran.

The 46-year-old stalwart of O’Brien’s remarkable Ballydoyle operation enjoyed his greatest day in the sport on Saturday, winning on his 12th Derby ride after twice before finishing runner-up.

The sole blot on his day was a two-day suspension for interfering with Circus Maximus when launching Anthony Van Dyck’s daring and decisive run up the inside rail.

Monday’s Gowran card could be rewarding for Willie McCreery whose Up Helly Aa is an interesting contender for the concluding maiden.

The son of Galileo and Group One winner Fiesolana should step up considerably for his promising debut second at Cork.