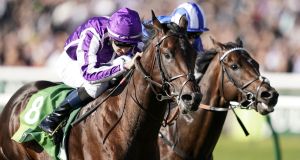 Aidan O’Brien’s second attempt to win the world’s richest sprint race looks like getting the green light with Ten Sovereigns on track to line up in Sydney this Saturday.

Quick ground conditions have been a prerequisite for the July Cup winner to line up in the $14 million Everest race at the Royal Randwick track.

That’s on the back of US Navy Flag’s flop in last year’s event when failing to make the frame on testing going.

Like him Ten Sovereigns takes on Australia’s finest sprinters as the reigning July Cup champion and local reports down under suggest the weather outlook in Sydney are favourable for the Irish star.

Ryan Moore is expected to travel for the ride on the colt who disappointed on his last start over five furlongs behind Battaash in the Nunthorpe Stakes at York.

Ten Sovereigns is a 14-1 shot in some ante-post lists but pleased connections in a weekend workout over five furlongs at the Canterbury track.

“It was a proper bit of work. He’ll have a quite couple of days, then we’ll up his exercise again but that was the last work on grass,” O’Brien’s representative, Andrew Murphy, told local media.

“The way he looks tells me he’s right. Everything that’s happened so far there hasn’t been a thing he hasn’t responded to.

It is the third renewal of the Everest, a race financed by the purchase of a dozen slots in the final line up.

Local star Santa Ana Lane is a 4-1 favourite while Redzel, winner for the first two years, is an 8-1 shot. The draw for the race is on Tuesday.

Ten Sovereigns has been joined in Australia by three other Ballydoyle stable companions - Magic Wand, Hunting Horn and Il Paradiso - who’ll aim at lucrative prizes over the coming weeks.

Joseph O’Brien, famously a Melbourne Cup winner with Rekindling two years ago, is also sending a strong team Down Under including last year’s Irish Derby hero Latrobe once again.

Runner-up in a Flemington Group One last season, Latrobe could target Australia’s premier weight for age race, the Cox Plate, at Moonee Valley later this month.

He is joined in Australia by his stable companions Master Of Reality, Downdraft and Twilight Payment who are all in line for the Melbourne Cup on the first Tuesday in November.

Frankie Dettori has already been booked by owner Lloyd Williams to ride Master of Reality in the ‘race that stops a nation.’

Donnacha O’Brien continues his bid to retain the jockey’s championship at Gowran on Monday with five rides divided between his brother and father.

The two-year-olds Arthur’s Kingdom and Gin Blossom should be hard to beat in their maidens although it is the three-year-old Pasley who could be interesting in the concluding handicap.

The son of Camelot started favourite over nine furlongs at the track a couple of weeks ago which was his first start since April.

However he ran into the well handicapped Bigger And Better and always looked to be struggling at the distance.

Pasley is jumped to a mile and six this time and O’Brien is booked to ride which looks significant considering the horse is due to carry 8.12.

The King Of Kells won at the Curragh over six furlongs before finishing runner up at the minimum trip in Navan last week.

Now he’s upped to seven for Monday’s Nursery which shouldn’t be a problem for the soft ground lover.