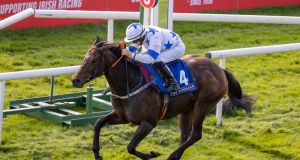 Make a Challenge wins at the Curragh on Sunday and has been marked up as 9-2 second favourite behind 4-1 market leader Advertise. Photograph: Morgan Treacy/Inpho

Denis Hogan could take his burgeoning training career to a new level after Make A Challenge was supplemented into Saturday’s Group One Qipco Champions Sprint at Ascot.

The six-furlong event is the first of four Group One races on British Champions Day and the likelihood of very testing ground means Make A Challenge is one of the favourites to maintain his spectacular progress.

The four-year-old has won five of his last six starts, the first of them off a mark of just 73 at Galway in the summer. On Sunday Make A Challenge easily won a Listed race at the Curragh off 109 and has been raised 2lbs more in the ratings for that.

As expected he was supplemented into the Group One contest on Monday and is one of 17 entries left in the race. They include the last three winners, Sands Of Mali, Librisa Breeze, The Tin Man as well as other proven Group One scorers, Hello Youmzain, Advertise and Brando.

Co Tipperary-based Hogan has had 26 winners on the flat in Ireland this season. The dual-purpose trainer has also had 18 victories in the current National Hunt campaign, some of which he has ridden himself.

In August Hogan also hit the headlines when his smart handicapper, Turbine, became the first horse in this country to test positive for an anabolic steroid.

Although the horse was banned from racing until March, Hogan escaped any penalty after a vet who had Turbine in his care for a wind operation in January accepted responsibility for the horse being administered in error a substance containing Nandrolone.

Ladbrokes’ initial reaction to Make A Challenge being supplemented was to make him 9-2 second favourite behind their 4-1 market leader Advertise.

Support for the Irish sprinter is in the context of other horses with proven winning form on soft ground also being popular in ante-post betting.

So Perfect, runner up in the Abbaye and Flying Five, has been left in the Sprint by Aidan O’Brien who could be heavily represented in Saturday’s other big races including the Champion Stakes.

That remains a rare Group One blank in O’Brien’s CV but Japan is an 11-4 favourite in some lists to remedy that.

Fourth in the Arc, Japan is challenged in the betting by the mud-lark Addeybb with indications that action on Ascot’s round course may be switched to the inner hurdles course. It would be the first time in the eight-year history of Champions Day that such a switch has been necessary.

O’Brien’s Champion Stakes possibles also include Magical and Hermosa, although both are also among the entries for QEII over a mile and the Filly & Mares race over a mile-and-a-half. The latter contest also includes Dermot Weld’s Blandford Stakes winner Tarnawa.