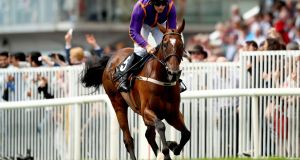 Willie Mullins has pointed to Wicklow Brave’s 2016 Irish St Leger victory as the highpoint in the career of a horse he once acclaimed as the most versatile anyone has trained.

The ten-year-old star had a unique hat-trick in his sights at the Far Hills tracks in New Jersey on Saturday night before sadly sustaining a fatal fall at the last fence with the $450,000 Grand National at his mercy.

Victory in that would have given Wicklow Brave a Grade One victory over fences to go with top-flight success over hurdles and Group One glory in the 2016 Curragh classic under Frankie Dettori.

The hugely popular runner won 17 of his 59 career races and had been unbeaten in three starts over fences prior to his run in America.

“He was uniquely versatile and a legend for us, giving us some fantastic days and bringing us all over the world,” Mullins said on Sunday.

“He jumped spectacular the whole way and had the race won only to jump the last. He stood back at it, winged it, barely caught the top and fell down on his shoulder,” the champion jumps trainer added.

Wicklow Brave twice ran in the Melbourne Cup and also lined up on the flat at Belmont Park in New York in 2017.

However his finest hour on the level came closer to home when he shocked the 1-7 favourite Order Of St George in the Irish Leger.

“That would have to be the best day. It was a shock. He was 11-1 and you don’t expect to beat a 1-7 favourite like Order Of St George with a horse bought to be a bumper horse at the Derby sales.

“But one of the biggest days for our yard was when he and Patrick (Mullins) won at Punchestown (2017 Champion Hurdle.)

“That was the year we turned the tables on Gordon Elliott (for the trainers championship) and we came from nowhere. I think that was the day we went from plus to minus so we will always remember that here,” Mullins said.

Wicklow Brave was also a Cheltenham festival winner having won the County Hurdle in 2015. He was only just denied another win in that race last March.

Mullins’s international focus will switch to Australia on Wednesday when True Self lines up for the Geelong Cup in Victoria.

Dermot Weld’s Media Puzzle won the race in 2002 prior to landing the Melbourne Cup but True Self’s target is the Group One Mackinnon Stakes a few days after the famous Flemington handicap.

“The Geelong Cup is the target, followed by the Mackinnon Stakes. She’s entered in the Melbourne Cup but she won’t get into that,” Mullins explained.

Joseph O’Brien’s Latrobe finished runner up to Trap For Fools in last year’s Mackinnon, a mile and a quarter event run on the Saturday after the Melbourne Cup