Down Royal in ‘limbo’ over prospect of no-deal Brexit 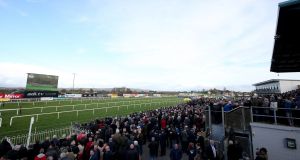 A no-deal Brexit on October 31st could have an immediate impact on Down Royal with officials there currently waiting to react to whatever the political situation throws at them.

The Co Antrim racecourse’s “November Festival” starts on November 1st with the €140,000 Ladbrokes Chase – the first Grade One prize of the National Hunt season – taking place a day later.

That timing threatens to make one of Northern Ireland’s two racetracks the focus of much more than just sporting attention given the widespread uncertainty about movement across the Border and from Britain.

There have been six British-trained winners of the Champion Chase in its 19-year history and Down Royal’s management has been in contact with a number of cross-channel based trainers who might send runners in just over three weeks’ time.

Down Royal’s chief executive officer Emma Meehan said on Tuesday she had also got in touch with the British Horseracing Authority (BHA) who recommended that horses travelling from Britain to the big meeting be ferried from Liverpool to Belfast.

“It seems to be the case that horses from the British mainland would travel by ferry from Liverpool to Belfast. There would be no point travelling into Dublin should there be no-deal,” she said. “They [BHA] are indicating Liverpool is their port of choice for migration across the Irish Sea if there’s no-deal on October 31st,” Meehan added.

However, the Down Royal chief executive suggested the effect of a no-deal in relation to movement over the Border could wind up being felt more on the track’s Christmas date on St Stephen’s Day rather than at the start of November.

“I wouldn’t think if there is no-deal that it would have much of an impact on November 1st-2nd. I would probably be more concerned about the Boxing Day fixture. The reality is it’s unlikely customs, checks and balances [will be in place] on November 1st along the Border at this rate, should there be no-deal,” she said.

Like so many other sectors Meehan said racing is currently in “limbo” over Brexit. There have been engagement sessions with racing stakeholders over preparations for a no-deal but everyone is anxiously waiting for some certainty on the matter.

“While the information is pertinent you can’t really apply it because we don’t know where we are – so we’re watching the news.

“We’re talking with the relevant stakeholders but we’ll just have to be ready to react and try and make it as seamless a process as possible for all concerned.

“I think there will be an extension the way things are going at the moment. If not we will do all in our power to react accordingly. But at the moment there’s no clear direction so how can anyone create a flight path?” she said.

Over 10,000 people are expected to attend the November Festival which is Down Royal’s biggest fixture of the year. In the past the big race has been won by some of the biggest names in jump racing including the legendary Kauto Star in 2010.

The North’s other racecourse in Downpatrick will host its final fixture of 2019 on Friday.

There are just over three weeks to the end of the 2019 flat season and Colin Keane and Donnacha O’Brien continue their duel for the jockeys championship at Navan on Wednesday.

Keane leads by three winners (93-90) although O’Brien remains an 8-11 favourite with Paddy Power to retain the title.

Keane has five rides at Navan while O’Brien has just two although Degraves in the juvenile maiden could help him keep tabs on his rival.

The Camelot colt was significantly backed on his second start at the Curragh behind the smart Sinawann and looks the pick of Ballydoyle’s three runners.

The race for the apprentice title is even tighter with Andy Slattery and Oisin Orr locked together on 37 winners each. Slattery, rated a 1-2 favourite to take the crown on November 3, has half a dozen rides on Wednesday, one more than Orr.

The King Of Kells proved his soft ground credentials when winning at the Curragh last time and could defy a 5lb ratings hike in the Nursery.

Ole Gunnar Solskjaer: ‘The sky’s the limit’ for Mason Greenwood 11:59
Monica Seles: The warrior queen who could have been the best ever 11:25
Thrillingly fluent, thrillingly pointless: Man City’s riposte comes too late 08:54
World Athletics freezes out Russian athletes after $5m fine goes unpaid 08:41
European Tour lifts Olesen suspension due to court delay 08:08
Here is your handy guide to sport on television this week