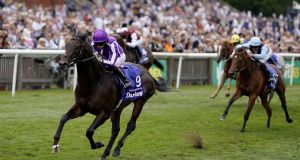 It’s a stretch to say the ‘British Champions Day’ tag is a misnomer but the context of Saturday’s action includes Aidan O’Brien’s decision to send Ryan Moore to Australia instead of Ascot.

Instead of gracing the climax to the British season, Coolmore’s No 1 jockey is in Sydney to ride O’Brien’s Ten Sovereigns in the world’s richest turf race.

The star Irish sprinter lines up in the $14 million ‘Everest’ event at the Royal Randwick track which is due off at 6.15 Irish-time and can be seen on Sky Sports Racing.

“We think the race is a great initiative and it’s a privilege to be part of it. Ryan knows the horse very well and we wanted him to ride the horse in the Everest,” O’Brien told Australian media on Friday.

The Irishman himself is forsaking the long trip ‘Down Under’. But considering O’Brien has 13 runners at Ascot, Moore’s absence adds to a sense of fate not favouring British racing’s end of season showpiece event.

Once again the weather has proved to be a spoilsport with going so soft that for the first time in the event’s nine-year history the three round course races have had to be moved on to the inner hurdles track. Ironically that looks set to ride much better than the heavy-ground straight mile.

Top-notch performers like the top stayer Stradivarius and Magical, who will attempt to fill in a rare Group One blank on O’Brien’s CV in the QIPCO Champion Stakes, do bring undeniable star power.

But on a programme created for champions, the absence through a variety of circumstances of elite stars such as Enable, Crystal Ocean, Battaash, and indeed Ten Sovereigns, looks like being keenly felt.

France’s mud-loving favourite for the QEII, The Revenant, hasn’t even run in a Group One before, never mind won at the top level.

Donnacha O’Brien takes over from Moore on the main Ballydoyle hopes, riding for his father in five races, and his brother, Joseph’s, Speak In Colours in the Sprint.

That race also sees Co Tipperary trainer Denis Hogan attempt to land a first Group One with the supplemented Make A Challenge while Aidan Fogarty saddles Forever In Dreams.

The bulk of the 20-strong Irish challenge elsewhere on the card is made up courtesy of O’Brien Snr and Dermot Weld.

The latter will attempt to add to his fine ‘Champions Day’ record with both Tarnawa in the Fillies & Mares and Imaging who in the conditions could be a big-priced value outsider against The Revenant.

Just half a length separated the pair in a German Group Two back in May when Imaging’s cause wasn’t helped by a bump soon after the start. O’Brien brings his 2,000 Guineas winner Magna Grecia back to action in the QEII, the colt having injured a hamstring in the Irish Guineas.

Magical and the two mares Coronet and Deirdre look the standout performers in the Champion Stakes. O’Brien’s runner makes a quick reappearance after a gruelling Arc run just 13 days ago. That could help the Japanese star Deirdre reverse Irish Champion Stakes form.

On Saturday Leopardstown hosts its second last flat fixture of 2019 with the Group Three Killavullan Stakes featuring. Ballydoyle’s hope Iberia has a slight edge on Geometrical on National Stakes form. However the latter’s proven form on soft ground could help Jim Bolger’s runner turn that around.

The prolific One Cool Poet has been one of the stories of the flat season, winning four of his last five starts including an unprecedented hat-trick at the Galway festival. Matthew Smith’s runner is now rated 100 and takes his chance in the Listed Trigo Stakes.

That still leaves him with something to find against the likes of Riven Light who was runner-up over a mile and a half at Limerick last weekend. The drop back to ten furlongs should help Willie Mullins’s runner.

The weekend’s big money prize is the €120,000 Foran Auction Race Final which sees Ger Lyons saddle four runners. Colin Keane has opted for the top-rated Brunelle although the stretch out to seven furlongs could be a problem to her.

Jessica Harrington’s Elite Legion has a wide draw but if Schroeders Mistake has got over a good run behind Tango last weekend she might be in line for a big payday.