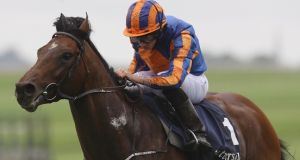 Aidan O’Brien is convinced Churchill will not fail for a lack of stamina when he runs over a mile and a quarter for the second time at Leopardstown on Saturday.

The dual Guineas winner bids to show his versatility in the Qipco Irish Champion Stakes on the back of a good performance in the Juddmonte International at York, where he went down by two lengths to Ulysses after winning the private battle with fellow three-year-old Barney Roy.

That was a pleasing display following an under-par effort behind Barney Roy in the St James’s Palace Stakes at Royal Ascot.

The Ballydoyle trainer told At The Races: “Ryan (Moore) was very happy with him (at York), other than he didn’t win.

“We said that he would improve for York, fitness wise, but it will be interesting. He’s in good form.

“We always felt we’d be very happy going back to a mile any time we wanted to.

“Ryan was always very happy that he would get a mile and a quarter. He always had a lot of confidence in him and he rode him like that. That was the right thing to do.

“He was a Chesham winner as a two-year-old and very few horses that turn out that early keep going the way he’s going.”

Three-year-old colt Eminent was only sixth to Churchill in the Qipco 2000 Guineas at Newmarket but showed what a talented horse he was with a convincing all-the-way win in a Group Two over a mile and a quarter at Deauville last month.

“We’ve been very happy with him since his run in France.

“We achieved exactly what we wanted to achieve there — it served as a nice confidence-booster for him.

“I think this horse has done well to achieve what he has already this year as he’s only just starting to mature and grow into his frame. He’s seems to be getting there now.

“It’s a massive plus to have Frankie Dettori on our side. He’s won this race a few (six) times and he’s one of the world’s best.

“We’ve drawn in stall one, so tactically it should be fairly simple and Frankie will ride him as he finds him.”

O’Brien also supplies the two other three-year-olds in the line-up — Cliffs Of Moher and Taj Mahal — while there is plenty of talent amongst the older brigade.

That is no better personified than by Success Days.

Ken Condon’s admirable five-year-old always wears his heart on his sleeve and landed the biggest success of his career in the Group Two Sky Bet York Stakes in July.

He is set to retire at the end of the campaign and his trainer wants to give him another chance or two at the top level.

“He was very tough at York. He did it the hard way and he wasn’t for passing,” said Condon.

“He’d been chinned a couple of times earlier in the season so it was nice for him to get his head in front and he’s come out of the race super.”

Moonlight Magic is another Group-race regular who has yet to strike at the top level.

The Godolphin-owned four-year-old captured the Group Three Meld Stakes over nine furlongs on his latest start and trainer Jim Bolger believes he is capable of winning at a higher grade.

Bolger told www.godolphin.com: “He’s won two Group Three races and we’re optimistic that he can win a Group One race before the year is out.”

The Grey Gatsby, the winner in 2014 when trained by Kevin Ryan, has another go under the guidance of Dermot Weld, who is also represented by Zhukova.

Sir Michael Stoute is pleased with Poet’s Word, who returned from a three-month absence with victory in the Group Three Glorious Stakes at Goodwood.

“Poet’s Word is progressive and is in good shape,” said Stoute.