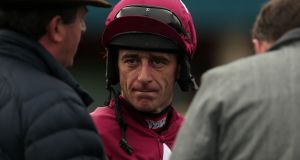 After scoring a spectacular own-goal in not handing Davy Russell a meaningful penalty, the regulatory body clearly feels it now has to be seen to act. Photograph: Donall Farmer/Inpho

After Davy Russell punched his horse in the head at Tramore over two weeks ago the odds about him holding anything but a weak hand in terms of a sympathy card would have been long. However, a combination of modern media outrage and racing’s timeless capacity for shooting itself in the foot mean it’s possible to feel for the former champion jockey.

Russell’s a cause now, a symbol: either a brutish representation of racing ruthlessness or a blackguarded victim of the worst excesses of mob outrage. Either way it’s an unenviable lot because being a cause is a very lonely role.

It’s one he will have to fill until at least until the end of Tuesday’s appeals body hearing at Turf Club headquarters on the Curragh, called because an original hearing charged with deciding how Russell should be penalised for punching Kings Dolly somehow decided a slap on the wrist was all that was required. As a model for how to make a bad situation worse it takes some topping.

The outcome is a narrative on the run in to this weekend’s €4.6 million Longines Irish Champions Weekend, which won’t be dominated by anticipation at the cream of Irish racing showcasing itself to the world but rather the fallout from an error of judgment at a nondescript meeting a fortnight ago.

Russell shouldn’t have struck the horse. Everyone acknowledges that, Russell included. By any standard jockeys punching horses doesn’t look good even if consensus has it that the most lingering physical consequence is almost certainly on the rider rather than the animal. It was a mistake that demanded a swift and decisive response. That didn’t come.

It’s well documented now how the incident was picked up on social media and how since then the Turf Club has been stumbling over itself in a vain attempt to play catch up on the outrage Russell’s punch provoked. After scoring a spectacular own-goal in not handing Russell a meaningful penalty, the regulatory body clearly feels it now has to be seen to act.

That this latest twist should largely come down to optics seems apt for a sorry saga which has revolved around the issue of perception and a discrepancy with substance which many racing professionals argue is at the heart of it all. Such nuance, however, is a grey area which has been largely swamped by towering waves of black and white.

Media works best trading in such black and white terms. Social media in particular trades on instant judgment. Before the Turf Club had even twigged what was going on, the clip of that Tramore incident had provoked opprobrium. And if the Turf Club’s response to date has been way too little it’s fair to say some of the commentary on Russell’s action has been way too much.

Lurid context-free pictures have been painted of a greedy bloodstock industry turning a blind eye to wanton cruelty, of a sport supposedly crammed with nasty people who get their jollies from hitting horses and largely dismissive of what the outside world thinks of it.

It’s a gross misrepresentation of how thousands of people – the overwhelming majority of whom have a deep and abiding affection for horses or else they wouldn’t do the job – spend their working lives dealing with these large, beautiful and unpredictable creatures, often in uncomfortable conditions and for less than brilliant money.

By definition anyone expecting perfect patience at all times in such circumstances will be expecting forever. No doubt there are those who’ve never lost their cool when half a tonne of wilful horseflesh acts up, but it is naive to believe they are in the majority.

Nevertheless thoroughbreds are among the most pampered and best cared of animals. They are bred to race and are far more deserving of the professional respect due to them from those charged with their care than some of the anthropomorphic extremes indulged in by those whose experience of horses is often as little more than a set of form figures rather than as a living, breathing creature.

Some people claiming to be appalled by Russell’s action have obviously been mercifully spared some of the real horrific consequences of man’s often fraught relationship with the animal kingdom.

The real pity of such a disproportionate response is how substantial welfare issues are deprived of similarly sustained attention.

The bloodstock industry has yet to implement a coherent anti-doping policy recommended nearly 21 months ago on the back of a series of steroid controversies in 2014. A fundamental platform for any such policy should be knowing at all times where animals are. Yet while every cow and pig in the country is traceable the same can’t be said for thoroughbreds.

Racing here has yet to properly address the whip issue and whether or not it is sustainable in perception terms that it continues to be used for both correction and coercion, a distinction many punters outraged at Russell’s punch don’t seem to have any problem with.

There’s the subject of rehabilitation for horses unable to race anymore and whether or not those still racing should be asked to jump obstacles on quick ground: all these are among issues a lot more substantial and far-reaching than one man losing his temper and striking out.

Russell made an error of judgment at Tramore. It’s ironic because he is renowned as a sympathetic rider. He is likely to wind up with a penalty of some sort on Tuesday, probably a ban in the region of seven days, because it can’t be okay to be seen to punch a horse.

It is racing’s mistake to have allowed this escalate to such an extent, first through inaction and then a remarkable lack of official cop-on, before now, belatedly, trying to get on top of it. The regrettable legacy for racing though is likely to be an even wider gap in future between boring grey and hysterical black and white.