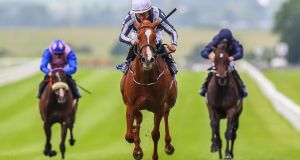 Shane Foley on Albigna. Both are newcomers to US racing’s shop-window event. Photograph: Tommy Dickson/Inpho

Aidan O’Brien and his son Joseph provide the bulk of the Irish challenge for the 36th Breeders Cup, which begins on Friday night. Yet it is Jessica Harrington and her jockey Shane Foley, both newcomers to US racing’s shop-window event, who might have the best prospect. They team up for one of the likely favourites Albigna in the $1 million Juvenile Fillies race on turf which is due off at the Santa Anita track near Los Angeles at 10.12pm Irish time.

It is 22 years since O’Brien snr first competed at the Breeders Cup, and over the two days he has 10 runners, including the Epsom Derby hero Anthony Van Dyck. He will try to give the Irishman a seventh victory in Saturday night’s mile and a half turf event.

Joseph O’Brien, famously successful in the event as a jockey on one of his father’s previous Turf half-dozen St Nicholas Abbey, has three chances to emulate the great Frenchman Freddie Head by both riding and training a Breeders Cup winner.

Both are represented in Albigna’s race on Friday night, which represents another potential landmark in Harrington’s remarkable late-career rejuvenation.

It is just a couple of years since Sizing John gave her a complete hand of the Cheltenham festival’s major events by landing the Gold Cup. Anyone thinking that was a final ribbon on a pioneering career has been forced to think again.

Alpha Centauri’s “Horse of the Year” campaign in 2018 included a first classic for Harrington, who at 72 has transformed herself into one of Ireland’s foremost flat trainers.

A hugely impressive group of two-year-olds this season has produced 26 winners in Ireland, topped off by Group One wins in both England (Millisle in Cheveley Park) and France with Albigna’s Prix Marcel Boussac.

Albigna’s owners, the Niarchos family, have a long and successful Breeders Cup history over the decades , most notably with the superb Miesque, so it is no surprise that Albigna pitches up in California for a potential end-of-season highlight.

However, when she breaks from stall nine of the 14 runners, and Foley faces the task of navigating a course around the famously tight inner turf track, many locals are likely to be surprised that Albigna runs without first-time Lasix.

Most of the European runners over the two days, including the horses from both O’Brien camps, will run on the anti-bleeding medication.

US racing continues to be an outlier among major jurisdictions in allowing such medication on race days, and it’s an element that reflects the fraught welfare atmosphere which will overhang all the action until the concluding Classic is run in the early hours of Sunday morning.

The grim combination of factors that contributed to 30 horses being killed at Santa Anita during the spring, either racing or in training, has put the future of racing itself in doubt in California. Even the state’s governor has warned the sport’s future is up unless it reforms in terms of animal welfare.

Race-day medication continues to be an issue authorities in the US seem reluctant to properly address, something that dilutes extensive efforts that Santa Anita has otherwise pursued with the looming prospect of the eyes of the US sporting public tuning in on them.

Half a dozen equine deaths during the track’s autumn season represents a more usual rate of attrition, and is perhaps a reflection of the extensive focus on both the turf and dirt tracks.

Other measures for this Breeders Cup include exams from a pool of 30 vets on duty, and a requirement for two-week medical histories for each horse to be made available.

There has also been out-of-competition testing on likely runners throughout the year, with no positive outcome from over 250 horses tested. Even the permitted dosage of Lasix has been halved.

For a sport under extreme pressure in California, and under a welfare microscope throughout the US, the best result over the 14 Breeders Cup races, worth $28 million in total, will be all horses and jockeys finishing safe and sound.

Albigna is a morning line 9-2 favourite in the US, but O’Brien’s Arizona is even shorter (5-2) for the Juvenile Turf, a race the Ballydoyle trainer has won four times in its 12-year history.

Placed twice behind Europe’s outstanding juvenile champion Pinatubo, Ryan Moore’s mount looks a clear form-pick but has an unfavourable wide draw in 12. Andesite is inside him and might be a value alternative bet given he was unlucky behind Structor at Belmont.

The Grade Two Turf Sprint is first of the five Breeders Cup juvenile events where Joseph O’Brien’s Alligator sports first-time blinkers as well as first-time Lasix. Even with a wide draw, however, Frankie Dettori’s mount A’Ali looks best of the Europeans.