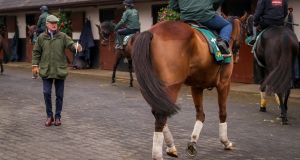 Willie Mullins at his yard at Closutton, Co Carlow in advance of the Irish jumps season. “We have got enough rain to work them and I was very happy last week with how fit they looked and what the guys riding them.” Photograph: Oisin Keniry/Inpho

Willie Mullins has said his training fees for the controversial Supreme Horse Racing Club are paid up to date and he hopes the deadlock between the ownership operation and Horse Racing Ireland can be resolved quickly.

The champion trainer also confirmed on Wednesday that the sport’s highest rated steeplechaser, Kemboy, is among 14 horses he currently trains for Supreme.

None of them not run at present following HRI’s decision last week to suspend the club’s account on the back of allegations of financial misdemeanours from some of its members. It is believed allegations include claims of shares in horses being oversold.

HRI took the step last week after failing to get details from the management of Supreme in relation the ownership of individual horses, including contact details and shareholdings. The club reportedly committed to providing that information.

However Jonathan Mullin, HRI’s director of communications, said on Wednesday: “HRI confirms that it has received information from Supreme Horse Racing Club but unfortunately the details received were unsatisfactory and fall someway short of the basic information needed to move this process on.

“We continue to be in correspondence with Supreme Horse Racing Club in a bid to resolve concerns shared with us by members.”

The possibility of members taking legal action against Supreme Racing, founded by Englishman Steve Massey, and which has been involved in a string of notable successes with Mullins over recent years, hasn’t been ruled out.

In the short term however the HRI ban has put the careers of some high class horses, most notably the triple-Grade One winner, Kemboy, in limbo.

Plans to run him in Saturday’s Ladbrokes Champion Chase had to be shelved. Aramon is another top-flight winner trained by Mullins for whom the outlook is uncertain.

HRI’s ban has been criticised by a number of Supreme’s near-500 membership as being unfair to ordinary members. The controversy has also focused attention on the ruling body’s regulations in relation to syndicates.

A new directive introduced in July requires racing clubs to transfer to a syndicate model so that it’s clear horses are syndicated for racing purposes. The directive change was highlighted to Supreme Racing Club last year.

So HRI’s launch of the winter jumps season at Mullins’s Co Carlow stables on Wednesday concentrated scrutiny on matters other than anticipation of a return to action for other stars such as the Gold Cup winner Al Boum Photo.

“I’m just going to train them and do as I always did,” said Mullins when asked if he could get involved in any future talks between Supreme and HRI.

“They [Supreme] have been good customers and I’m happy. I’ve no reason to stop anything yet anyway. Hopefully it will all be resolved,” he said.

“The authorities have to do what they have to do. They are in contact with them the whole time. Last week there was a meeting which resolved a few issues. I think there’s another meeting to take place before the end of the week which might resolve a lot more and it might get back up and running,” Mullins added.

He said most of his dealings with Supreme over the years had been with its Irish representative Jim Balfry. That included last week’s sale of the Graded winning mare Listen Dear at a Goffs Sale in the UK on the same day some members went public with their concerns.

“There was nothing different about Listen Dear. We sold another couple of horses at that sale. The owner rings me up, tells me to sell the horse, I sell it,” Mullins said.

He added that because of everything that was going on he rang Balfry who told him the majority of the owners wanted the mare sold. Listen Dear was sold for £38,000.

Mullins nominated the King George VI Chase at Kempton over Christmas as a possible target for Kemboy should the horse be allowed return to action.

The horse that provided Ruby Walsh with a perfect retirement send-off at Punchestown last April worked in front of the media on Wednesday alongside old favourites such as U De Sceaux and Douvan.

Also on show were younger stars such as Chacun Pour Soi, who could try to fill the one remaining gap on Mullins’s Cheltenham CV in the Champion Chase, and the Champion Hurdle contender, Klassical Dream.

Worryingly for his opposition the champion trainer declared himself very happy with the readiness of his squad now that the National Hunt season starts to get into full swing.

“We have got enough rain to work them and I was very happy last week with how fit they looked and what the guys riding them told me. With normal winter weather we should be ready to start the week after next,” Mullins said.

Considering he has already had 59 winners this term – and is on the verge of €1 million in prizemoney – that’s ominous for rivals of the man who has been champion for the last dozen years.

The impact of the freakishly dry ground conditions from last winter could even reverberate into this season as Mullins admits to having a backlog of young prospects waiting to go.

Even the former Champion Hurdle hero Faugheen is set to add a new chapter to his stellar career, by going novice chasing at the age of 11.

“He should have gone chasing last year. That was my mistake. He was bought to go chasing and is too young to retire,” said his trainer.