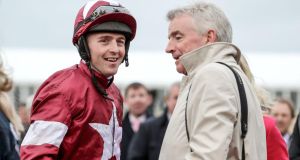 Keith Donoghue is the initial beneficiary of Michael O’Leary’s jockey plans for the coming winter and is set to team up with the Ryanair boss’ apparent No 1 hope Delta Work in Saturday’s Ladbrokes Champion Chase at Down Royal.

O’Leary’s Gigginstown Stud operation has won the first Grade One of the British and Irish National Hunt season for the last six years and is likely to be heavily represented again.

Davy Russell partnered Delta Work in all five of his starts during a notably successful novice campaign last season. However, Donoghue will take over on the potential Gold Cup hope this weekend.

Jack Kennedy’s presence on the sidelines with a broken collarbone means 26-year-old Donoghue has also come in for the ride on Samcro, who makes his debut over fences in a Beginners’ Chase on day one of Down Royal’s ‘November Festival’ on Friday.

“We’re using a panel of jockeys this season and they’re all there. There’s no set riders,” explained the Gigginstown spokesman, Eddie O’Leary on Thursday.

O’Leary said that panel will include Russell, Kennedy, Rachael Blackmore, Seán Flanagan, Robbie Power and Mark Walsh among others.

In the past Gigginstown retained both Russell and Bryan Cooper as their main rider, although they have adopted a ‘best available’ policy since Cooper was sacked in 2017.

Russell, in particular, has benefited from that – most notably by winning the last two Aintree Grand Nationals on Tiger Roll – but also in teaming up with a large number of Gigginstown runners from Gordon Elliott’s yard.

Donoghue has ridden Tiger Roll in six of his last eight starts, including a pair of victories in Cheltenham’s Cross-Country event, missing out only on the diminutive superstar’s two Grand National victories at Aintree.

Tiger Roll is favourite for an unprecedented National hat-trick next April but Eddie O’Leary wouldn’t be drawn into speculating on any riding arrangements for his brother’s powerful string so far ahead.

“We sincerely hope he [Tiger Roll] gets as far as the National. We’ll try and get him there in one piece first. Jockeys will be the least of our worries,” he said.

In May, Michael O’Leary shocked the racing world by announcing he will wind down the Gigginstown operation over the coming five years, explaining that he wants to spend more time with his young family.

The continuing impact of his powerful string will be felt on Saturday’s feature, for which seven of the nine five-day acceptors are O’Leary owned.

In flat news, Aidan O’Brien’s Mogul is favourite to land the rescheduled Vertem Futurity on Friday evening at Newcastle.

Switched after Doncaster was rained off last weekend, the final Group One of the British season will be a first top-flight event run on an all-weather circuit.

The switch looks to have worked against O’Brien who declared five runners, including Mogul, against a single opponent, Kameko, last Saturday.

Now Ballydoyle’s five hopes are among a dozen strong field which has seen the highly regarded maiden winners Kinross and Verboten join Kameko on the home team.

The move to Newcastle has also prompted both Jim Bolger (Geometrical) and Emmet Mullins (King Of The Throne) to take their chance in the race.

Victory for O’Brien would mean a record-equalling 10th win in the race.

1 Tipping Point: DeChambeau’s transformation raises questions, but who will ask them?
2 Ken Early: Resurgent United can be the top team – in Manchester
3 Monica Seles: The warrior queen who could have been the best ever
4 TV View: Stunned silence as Serpentine wins a socially-distanced Derby
5 Hatton you heard, it’s Tyrrell’s time despite DeChambeau’s dominance in Detroit
Real news has value SUBSCRIBE