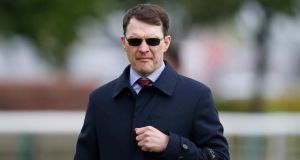 Out of luck in the French 2,000 Guineas at Deauville Aidan O’Brien made do on Sunday with Acapulco’s impressive Listed success at the Curragh where a ‘make do’ spirit appeared to have been adopted all-round.

The decision to keep racing during the Curragh’s €70 million redevelopment has been criticised but in the shadow of the remnants of the torn down old stands there was a generally positive verdict on the temporary facilities which will be in place for the 16 remaining fixtures at HQ this year.

Despite showery weather conditions many among the 2,500 people on-site could stay outside rather than have to use the temporary marquees. And although some bookmakers expressed concern at the ring being too spread out, jockeys and trainers said the arrangements generally made little difference to them.

“I admit I was apprehensive about building while racing but once its managed well I see no reason why we can’t get through the next two years,” said champion jockey Pat Smullen who had a hat-trick on Sunday. “For jockeys it makes no difference. Everything’s accessible and there are no negatives.”

Another former champion jockey, and now trainer, Johnny Murtagh, was delighted the track itself was being raced on again, a similar sentiment to his colleague Ger Lyons who has maintained throughout that the Curragh should have closed during construction.

“It’s time to park the negativity. We’re racing now and there’s no point being negative. This is a world class track and none of this affects the horses which is ultra important,” said Lyons who won a handicap with Mawaany.

The Curragh chief executive Derek McGrath was happy with the first test of the new facilities ahead of the Guineas weekend in two weeks time. However the impact of a 6,000 crowd capacity imposed under planning law is only likely to be tested in July’s Derby and September’s Champions Weekend.

“I’m delighted we’re up and running. The feedback has been constructive, and not all positive. We’ve had issues such as parking and with people flow. But they’re things that only need tweaks and generally I think people are delighted to see both racing and the journey of change here,” McGrath said.

Aidan O’Brien’s two French Guineas hopes, Orderofthegarter and Peace Envoy, were out of the money at Deauville behind the local pair Brametot and Le Brivido.

But his son Donnacha kept the home fires burning with a Curragh double highlighted by Ballydoyle’s new American recruit Acapulco who is 4-1 for Royal Ascot’s Kings Stand after a smooth win in the Listed Sole Power Sprint.

“It was perfect for her first day, a lovely start,” said O’Brien Jnr who had earlier won the two year old event on the 1-3 favourite Actress. Acapulco won the 2015 Queen Mary at Ascot for Wesley Ward and is in foal to Galileo.

Dermot Weld supplied weekend evidence his powerful string is coming out of a temporary lull and after Zhukova’s impressive Grade 1 success in Saturday night’s Man O’War Stakes at Belmont, Tandem and Dabulena both scored on Sunday.

Weld didn’t rule Zhukova out of staying in New York for the Manhattan Handicap later this month but said it was more likely she will come home with races like the Pretty Polly over Derby weekend and the Yorkshire Oaks as options.

“I always felt she would be very good as a five year old. She beat Found twice last year and she looked to have an outstanding chance last night,” he said. “We might leave her off for the summer and look at the Yorkshire Oaks and the Arc.”

Irishcorrespondent will be stepped up to classic company at the next Curragh meeting in the Irish 2,000 Guineas after making it two from two in the mile conditions race.

“He’s got everything, temperament, action, a great cruising speed,” said trainer Michael Halford. “We entered him in the Guineas at the second entry stage and after that you’d be tempted to run.”