Serena Williams found out by lack of game time 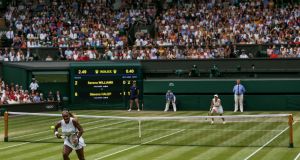 On the run: Serena Williams is outplayed during the women’s singles final on Saturday against Simona Halep. Photograph: PA

Somewhere among the blizzard of reaction to Serena Williams taking the sort of 6-2, 6-2 pounding from Simona Halep she normally doles out to others, former winner Martina Navratilova weighed in. “You can’t fake it,” she said.

Faking it is what Williams had been forced into after a year of miserable injury. To her enduring credit she made it to the Wimbledon final on a diet of 12 matches since January, just two against top 10 players.

No other player in the world would have had the audacity to entertain such expectations. But Navratilova was correct, Williams was trying to fake it against a steely Romanian, who had the experience of winning at Roland Garros last year in her locker.

Halep was no wannabe blinded by the majesty of Centre Court and the history of the club. She was no diva dazzled by a larger than life figure on the other side of the net. Just one of those beautifully calculating eastern European players with a plan and enough ice in her veins to pull it off. And like all champions a canny ruthless streak that was quick to the scent of vulnerability.

“I’m very sure that was the best match of my life,” said Halep, who was 4-0 up against the 23-time Grand Slam winner after 11 minutes.

The old adage of getting every ball back took flight with Halep as Williams gorged on unforced errors and again looked sluggish covering the ground. It was a combination that would end in grief as the first Romanian to win Wimbledon concentrated on staying in the point.

She knows how to manage every moment. So I knew that I have to stay there

Having played Williams 10 times before and won just once, the American had history on her side, the unspoken part that Halep’s previous reputation was as a player prone to choking.

How much Halep or Williams won or lost the match is a moot point. Halep was error free and she was hitting high percentages. First serves in were 76 percent and first serves won 83 per cent. Pitched against the best server in the game, Williams hit 68 per cent of first serves won and won 59 per cent of those. More devastating Williams had 26 unforced errors, equivalent to a set, to Halep’s three.

“When someone plays lights out, there’s really not much you can do. You just have to understand that that was their day,” said Williams, who has contested three Grand Slam finals since coming back from maternity leave in March 2018 and lost all three.

Last year’s US Open was one of her losses, more memorable for the ruling from the umpire, Carlos Ramos, that Williams was getting coaching from the stands. Then the point penalty, the game penalty and her demand that he apologize? “How dare you insinuate I was cheating?” screamed Williams. “You stole a point from me! You’re a thief!”

Then the booing that erupted when Osaka accepted the trophy and Williams in the eye of a divisive debate, some seeing her as a heroine standing up for the rights of women and mothers, especially black women, others a celebrated star living a life of egotistic privilege.

In Paris last month she was spotted in Disneyland in a wheelchair before the French Open, then lost early to a young American Sofia Kenin. She said her knee was pain free coming into Wimbledon. She read her notes under the towel at changeover and sheer strength of character took the 37-year-old ageing lioness through six games to the final.

Afterwards the idea that her off-court life interfered with tennis and her stand for equality in what players are paid was raised. Billie Jean King had asserted she should stop being a celebrity for a year, stop fighting for equality, and focus on playing tennis to achieve Margaret Court’s magical 24.

Maybe Navratilova is correct. The final lasted 56 minutes.The flip side is having to fake it on Centre Court

“The day I stop fighting for equality and for people that look like you and me will be the day I’m in my grave,” she replied.

No compromise. There never has been with Serena or her sister Venus. But maybe Navratilova is correct. The final lasted 56 minutes.The flip side is having to fake it on Centre Court.