World champion moves closer to another title in front of 141,000 at Silverstone 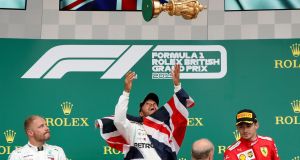 Lewis Hamilton won the British Grand Prix, taking the victory after an initial dogged fight with his Mercedes teammate Valtteri Bottas fell in his favour, during a safety car period. Once in the lead he ran a controlled race from the front to ensure a record sixth win at Silverstone.

Bottas was second, in front of the Ferrari of Charles Leclerc who had enjoyed an almost race-long scrap with the Red Bulls of Max Verstappen who was fifth and Pierre Gasly who was fourth. Sebastian Vettel also vied with Verstappen but came off badly. He hit the Dutchman and was given a penalty, finishing in 16th place.

Hamilton’s win was cheered on with abandon by the crowd who had enjoyed a fine spectacle at Silverstone with close racing across the field. Hamilton once in the lead after his pit stop took hold of the race and did not let go. It had to some extent fallen to him after a safety car intervention but he was relentless in completing it, right down to taking the extra point for the fastest lap on his final circuit.

Hamilton’s 80th career victory is his sixth at the British Grand Prix, making him the most successful driver at the race, surpassing Jim Clark and Alain Prost’s five wins. It continues a remarkable period of domination at Silverstone. He has now won five of the last six races here. Hamilton now has seven wins from 10 meetings and Mercedes have been beaten only once this season.

For Hamilton it is win he will take with open arms having been on the back foot in Austria and against a feisty Bottas determined to reignite his title hopes. He has extended his lead over Bottas to 39 points in the world championship, while Vettel has fallen to a full 100 points back. With 11 races remaining Ferrari’s task is surely insurmountable and Bottas is only just clinging on.

Bottas had held his lead into turn one as Hamilton came as close as he dared but despite having a real look at him through Brooklands, the Finn was giving no ground. Hamilton stayed with him harrying his rear, and again looking for an opportunity through Stowe and Bottas was forced onto the defensive. Hamilton seemed to enjoy far more grip and wanted to make the most of it.

On lap four he did so, they went wheel to wheel in a thrilling fight, through Brooklands and then in Luffield Hamilton edged ahead but Bottas came back to retake the lead up the inside of Copse. The Finn held his place by the skin of his teeth but with an impressive determination not to roll over.

The moment gone the pair continued line astern, separated by less than a second as Hamilton cooled his tyres, while behind them Leclerc, Verstappen and Vettel vied with one behind in third. The Red Bulls were particularly strong on the medium tyres.

Leclerc and Verstappen pitted together on lap 13 and they exited their pit boxes right alongside one another. The Dutchman had they edge on the exit but Leclerc took the place back when Verstappen went wide at the loop and the pair continued to vie with one another for fiercely for the following laps. There had been more racing in these opening laps than in some entire meetings this season.

Bottas pitted on lap 15 to take the medium tyres again however Hamilton stayed out now in the lead of the race. A safety car was called on lap 21 when Antonio Giovinazzi went off and Hamilton promptly dived in to the pits for what was a free stop. He took the hard tyre – on which he could attempt to make it to the end of the race – and had the lead outright from his teammate.

Bottas had done all he could on track but Hamilton’s fortune and strategy had left his hopes in tatters, as he still had to stop again for the alternate tyre. Hamilton led away from the restart while behind him once again Verstappen and Leclerc rejoined a gripping scrap, with the Dutchman emerging on top.

By lap 30 Hamilton had a solid two seconds on his teammate and the pair had left Vettel in third behind, nine seconds down.

On lap 38 Verstappen charged after Vettel and beat him through Stowe but the German followed him too hot into Vale and went into the back of the Red Bull, taking them both off track. They rejoined but had lost places and Vettel had to take a new nose. The stewards investigated and judged Vettel had caused a collision and gave him a 10-second time penalty.

For Hamilton however, the race win he craves was in his grasp, Mercedes considered a late stop for fresh rubber but Hamilton opted to stick with his rubber, stayed out and took the flag. The race had gone in his favour but he had finished the job with the usual consummate skill, while Bottas must wonder just when he will get a break. Behind them the sell out crowd of 141,000 had been treated to the racing F1 has long craved.

Carlos Sainz was sixth for McLaren, with Daniel Ricciardo and Nico Hülkenberg in seventh and tenth for Renault. Kimi Raikkonen was in eighth for Alfa Romeo and Daniil Kvyat in ninth for Toro Rosso. - Guardian