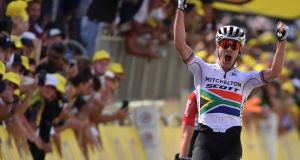 The 2019 Tour de France reached Brioude, hometown of Romain Bardet, with a career first stage win for South African rider Daryl Impey, of the Mitchelton-Scott team, who proved the most enduring of a day-long breakaway.

On a day with no significant changes in the standings, the locals were handing out media goodie bags containing an eau de toilette proclaiming “Operation Seduction in the land of Bardet” yet even the best perfumes in France would struggle to hide the fact that the local hero is having a stinker.

Bardet huffed and puffed on the final climb, to little effect, before he was swallowed up by the peloton on a hot stage through the Massif Central that proved less dramatic than Saturday’s frenetic stage into Saint-Étienne, in which Geraint Thomas crashed and Julian Alaphilippe recaptured the Tour’s yellow jersey with an 11th hour attack.

Thomas, who fell headlong at speed, was relieved to escape relatively unscathed, while Michael Woods, who accepted responsibility for bringing the Welshman and his teammates down, confirmed he would apologise to the defending champion.

“If I was him I certainly wouldn’t be too happy with Mike Woods right now,” the Canadian said. “They have a reason to be upset. That being said, every pro cyclist has made that mistake, Geraint did that a couple of years ago when he went straight off the road and Froome’s done it. It was just crap that I did it and it ended up affecting someone else’s race. It was just pilot error, simple mistake, and it even happens to the best guys.”

Woods said that his Education First teammate Simon Clarke who was ahead of him, was riding the Tour’s numerous descents “real fast, but really in control”.

“I always trust Simon. He’s an excellent descender and really knows the course, so it’s almost as if you have one of those rally car co-pilots when you’re riding with him. I saw everyone take it perfectly so I was really surprised to end up on the ground.”

While Woods nursed his wounds and Bardet continued to bemoan his poor form, controversy was brewing around Alaphilippe, after he was claimed by several other riders to have slipstreamed race motorbikes as he slipped clear to recapture the overall race lead in Saint-Étienne.

“There’s been a lot more motorbikes than ever in front of the race this year,” Martin said, “especially on the downhills. It’s really increasing the speeds and making it dangerous, more than ever this year.

“We need to say something. You don’t think it affects the race too much but it does make that fight for position even more important and that makes it more dangerous.”

Fuglsang was more direct, claiming that the proximity of motorbikes was influencing the outcome of races. “If you go over the top [OF A CLIMB]full gas and the guys in front get just a little bit of draft that can make the difference,” the Dane said.

“I don’t blame the riders. For me it’s the motorcyclists that need to get out of the way. They have the engine to do that. The riders just try to go as fast as possible.

“When you see two riders looking like they sit five metres or ten metres behind a motorbike, and you know a motorbike is helping, even if it’s closer than 50 metres in front, it could be a possibility that it has an impact.”

Alaphilippe, now established as the key agent provocateur in this year’s race, scoffed at the suggestions. “I took a motorbike,” he responded sarcastically on Saturday evening. “It was really fast , better than my bike.”

The proximity of motorbikes and the potential for slipstreaming has been hotly debated in recent years and Fuglsang was among those to call for new rules stating that motorbikes should not be allowed to get closer than 50 metres to riders.

“I know that sometimes you don’t get the close-up pictures you want or you need better cameras,” he said, “but if studies say that a motorbike, even 50 metres away, still makes a difference, then it needs to stay more than 50 metres away. They have to figure out a way to make it stay away if they don’t want to influence the race.”

While the Tour organisation stated that no official complaint had been made, Mollema remained incensed over the increasing role that he believes motorbikes are increasingly playing in major races.

“The motorbikes are way too close now,” the Dutchman, riding for the Trek Segafreddo team said. “The television [COMPANIES]are more in control of the race and don’t listen to the UCI [world cycling’s governing body).

“The UCI knows the problem. The riders have been complaining and teams too, but nothing really changes. The cameras just do what they want. They have their job to stay close to the peloton and to have the first riders, but on the downhill and flat parts, that’s too close.” - Guardian