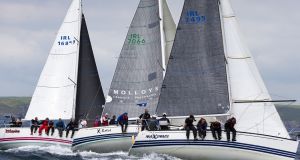 Solid conditions greeted the 95-strong fleet of the O’Leary Life Sovereign’s Cup off the Old Head of Kinsale on Wednesday as the four-day series delivered a full race programme.

With strong winds forecast to put day two into some doubt, it could yet be Friday before firm favourites emerge, although there are plenty of familiar names at the front of most classes.

George Sisk’s WOW from the Royal Irish Yacht Club in Dún Laoghaire romped home in the single race Coastal course after just over three hours, leaving a string of local boats in his wake.

Eight crews are contesting this division, many of which might otherwise have featured in Division 0, that only has five entries.

However, it was in this class that Frank Whelan’s Greystones Sailing Club laid to rest any doubts following the recent ICRA national championships with two wins for the day against Conor Phelan’s Jump Juice from the Royal Cork YC.

Other classes have bigger numbers where consistency is more challenging, notably in the Dragon class that is holding its national championships as part of Sovereign’s week.

Of the 17 competing boats, the top three are tied on points after two races with Martin Byrne’s Jaguar racing team from the Royal St George YC leading only on tie-break.