Australia lord it over England to leave hosts in trouble 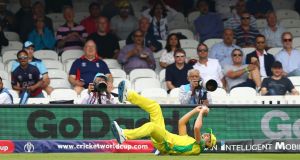 Now the England camp might acknowledge a little nervousness about their position. After a comprehensive 64-run defeat, in which Australia dominated from start to finish with just the odd minor hiccup, England can still control their own destiny. But they may well need two victories in their last two group games against the two sides who have yet to be beaten in this tournament, India and New Zealand.

Meanwhile, Aaron Finch’s side - and increasingly his calm presence directing operations in the field and piling up the runs at the top of the order - can realistically contemplate another World Cup semi-final. Only the mathematicians can argue against this. They have cause for optimism now. Australia are unbeaten in their previous World Cup semi-finals.

Here Finch hit his second century of the tournament to ensure a challenging target and then he shrewdly shuffled a bowling attack that is growing in confidence and potency. As in 2015, Mitchell Starc is Australia’s ace. He dispatched three of England’s key batsmen, Joe Root, Eoin Morgan and Ben Stokes, as well as the last man, Adil Rashid, which meant another England run chase faltered grimly in the final overs.

The first two of Starc’s trio of batsmen victims were dismissed before reaching double figures. Once again Stokes, who hit a gritty 89, was the only significant obstacle to England’s opponents as he tried to rescue a side that had slumped to 26 for three in pursuit of 286. To make matters worse he was hobbling towards the end of his knock having been given treatment on his calf muscles.

This was an alarmingly straightforward victory for Australia especially since they lost a toss that seemed a good one to win. However this was never reflected by the scorecard. It took England 23 overs and 123 runs to take a wicket and it fell to the off-spin of Moeen Ali. In those opening overs under heavy cloud cover and on a pitch that had long been covered due to overnight rain, the new balls jagged off the seam. They passed the inside and outside edges of the bat on several occasions but Finch and Warner remained unperturbed. This was merely an occupational hazard and this pair were prepared to battle on in the knowledge that every over they survived would be a source of exasperation to the fielding side.

Finch, in particular, had some luck. His first edge flew over the top of Root at second slip; he had a life on 16 when James Vince, diving to his right at backward point, almost clung on to a very hard chance; on 18 he was perilously close to being lbw on review. No matter. Both Australians battled on regardless; anything short was pulled and cut with conviction.

Morgan, understandably, allowed Chris Woakes, the most threatening of the bowlers, seven overs in a row but still the wickets would not come. With Mark Wood off target in his first spell he suddenly turned to his spinners without immediate success. Both batsmen were prepared to attack Moeen, who was hit for two of the three sixes in the innings. Then one of his deliveries popped and David Warner mishit to cover.

But Finch was still going strong, while England were showing signs of nerves. There were too many misfields on a billiard table outfield, some overthrows and a missed stumping when Usman Khawaja was on strike. However, Stokes seemed to energise the team when he disturbed Khawaja’s stumps. He embarked on a lively, disciplined five-over spell as Morgan returned to his pacemen.

Once Finch had completed his second century of the tournament he top-edged a hook to long leg against Archer. Wood’s second spell from the Nursery End was much better and he accounted for the dangerous Glenn Maxwell; Archer briefly became the leading wicket-taker in the tournament though Starc would sail past him later in the day.

Marcus Stoinis and Steve Smith ended up in the same crease, both thinking about a second run and coming to different conclusions, with the former duty bound to take his leave. Smith gleaned a few more before holing out while Alex Carey improvised cleverly at the end. The total of 285 for seven could have been much higher. But it did not need to be.

Vince’s stumps were splattered by the second ball of the innings, surprisingly bowled by the lanky left-armer, Jason Behrendorff, an inspired selection, who would end up with five wickets for 44. It was a good ball with a hint of swing met by a very inappropriate shot.

Then came the critical departure of Root after the perfect Starc inswinger thudded into his pad. Two overs later Starc induced Morgan to mishook straight to long leg, another lame dismissal that prompted the thought that in these circumstances with an opening bowler on the rampage in Test match mode, Stokes might have a better technique to survive than the England captain at No 4.

When Jonny Bairstow holed out it was 53 for four and the situation was desperate. There was a partnership of 71 between Stokes and Jos Buttler but when the latter was also caught on the boundary the chase was out of control. Then Starc delivered the perfect yorker to bowl Stokes and it was completely out of range.

Now England face an agonising five days before they meet India at Edgbaston. They may need that time to enable them to field their best team. Stokes’s body is threatening to rebel and there is an increasing desperation, which they are not allowed to articulate, to get Jason Roy back at the top of the order.

This result leaves three sides - Bangladesh, Sri Lanka and Pakistan - sensing the possibility of an unlikely semi-final slot. For Pakistan, in particular, there is a clear path forward, if they can defeat New Zealand at Edgbaston on Wednesday.