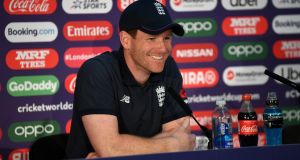 Eoin Morgan: “I don’t think I could do anything, or should so anything, to try influence the fans to change their mind.” Photograph: Gareth Copley/Getty Images

Eoin Morgan has declined to join the chorus of voices asking supporters not to boo Steve Smith and David Warner, adding that the pair may have served bans for last year’s ball-tampering scandal but rebuilding public trust takes longer.

Speaking before Tuesday’s heavyweight World Cup group game between England and Australia – which Jason Roy will miss with a hamstring injury – Morgan was asked if he would follow India’s Virat Kohli and Justin Langer, the Australia head coach, by requesting fans go easy on Smith and Warner.

But despite 15 months having passed since the Cape Town incident that led to the Australian batsmen being stood down from leadership roles, suspended from international cricket for a year and the subject of widespread public criticism, Morgan believes it is not in his remit as England captain to issue orders to fans.

“I would never use the position I’m in to influence fans or try to change the game in some way,” Morgan told BBC Sport. “They [Smith and Warner] have committed something and they have served their penalty. It doesn’t necessarily mean they are welcomed back with open arms into the cricket community. Regaining trust takes a lot of time.

“Who knows how long it will take? I don’t think I could do anything, or should so anything, to try influence the fans to change their mind.”

Morgan admitted Kohli’s much-praised intervention during India’s win over Australia a fortnight ago, in which he asked fans to clap Smith, prompted him to consider doing the same, only to decide on reflection that “it didn’t sit right with me”.

Jonny Bairstow, who struck up a friendship with Warner during this year’s Indian Premier League, used his Telegraph column to allude to double standards on the issue, chiefly that Darren Lehmann, the former Australia coach, urged home fans to make Stuart Broad “cry” during the 2013-14 Ashes.

While England have already faced the pair during a warm-up match in Southampton, Lord’s is the first meeting in an international. The stewards have been briefed to be on the look out should any booing directed at Smith and Warner turn into personal abuse; if so, it may violate ticketing terms and see any offender ejected.

The Australia captain Aaron Finch, who has heard booing directed at the pair throughout their time in England, said: “It hasn’t affected our boys one bit. I can honestly say that if anything, it’s given them a bit more motivation.

“If a handful of people or a whole stadium are booing them, it doesn’t make any difference to how hard they watch the ball or whether they doubt themselves or anything like that. I think it’s a bit of white noise to be fair.”

Warner has certainly appeared unaffected, scoring 447 runs in six innings, including two centuries. The 32-year-old has been more watchful in doing so but Morgan said if he does switch to his more typical aggression, England’s bowlers have plans.

Morgan is once again without one of his own incendiary openers. Roy had a fresh scan on his hamstring tear on Monday morning but despite netting afterwards, Sunday’s meeting with India at Edgbaston is now the revised goal.

The injury gave rise to talk of whether Alex Hales, who was “deselected” from the World Cup due to a recreational drug ban, could return. Morgan is unable to state on the record that the right-hander is now ineligible but said, after speaking to national selector Ed Smith, the pecking order of replacements remains the same.

This likely means Joe Denly and Dawid Malan, who featured before the tournament, are next in line. In Roy’s absence, James Vince once again gets the chance to prove his obvious talent can translate into an innings of substance; from 12 ODI caps to date, the stylish right-hander has just one half-century.

Vince is the junior member of a batting line-up that is looking to make amends following Friday’s collapse to 212 all out against Sri Lanka in Leeds, a 20-run defeat that increases the pressure as they look to shore up a semi-final spots.

Finch added: “We are expecting England to come out ultra-hard and take the game on, which has been one of their main traits over the last couple of years. I think the pressure is increasing on everyone.” –Guardian