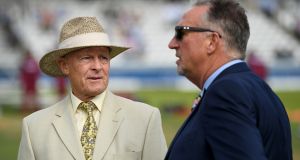 My God, I wish Geoff Boycott had approached playing cricket like he approaches no-deal Brexit. The long-time cricketer turned long-time commentator was on Good Morning Britain this week, when he was asked about his Brexit strategy, rather in the same way you might get Jeremy Hunt on the show and seek his opinion as to whether he can even bear the poignancy of not being able to watch Jimmy Anderson in World Cup conditions like these.

Having immediately attempted to flirt with Susanna Reid with the same gossamer touch you’d expect of a man convicted of a brutal assault on a former partner, Boycott moved into other arenas of incompetence.

Of most perplexing note was his carefree enthusiasm for the UK exiting the European Union without a deal. “We fought two world wars and we came out on top,” analysed Boycott. “Why? Because of the spirit and determination of the British people. That’s what the British people do . . . we’re a strong people. We’ll survive!”

Yes! Have it! Such a relief to hear someone saying we should just get out there and smash it and not agonise at length over the consequences of how we play it lest anything ends up going wrong. What’s the worst that can happen, and so forth.

On the other hand: who on earth is this devil-may-care adventurer, this fast-and-loose buccaneer, this cricketing personality type simply made to get the foam fingers wagging appreciatively at the Big Bash? Can it really be Geoff Boycott? I think it’s the sheer cavalier abandon that makes you wonder what might have been. Back in the day, it often felt to cricket watchers as though Boycott was in for an entire summer, every time he was in, inching defensively and absolutely without apology toward the low 20s by lunch.

Do you agree with Geoffrey Boycott's views on Brexit? https://t.co/fbanmFa5pH

“It was more of an occupation than an innings,” John Woodcock wrote witheringly of one such anti-spectacle, an innings on the first day of which Boycott went a full 45 minutes without scoring, among various other lowlights.

But will you just look at how he Brexits! By the seat of his actual pants. Without pants, if necessary. If only Boycott’s future self could have written one of those letters to his 27-year-old self.

“Come on Geoffrey, my lad,” this might have run. “I know that right now you think people have paid their money to see you and you’re keen to treat that investment with the utmost contempt, ideally by blocking your way to a joyless 50 by close of play, which will have the joint effect of letting the England selectors see exactly how you feel about their pointed call for ‘brighter cricket’.

“I know that right now you value being boring, technically faultless and incredibly reliable as virtues. I know you make no apologies for taking obsessive amounts of care. But listen: we won two world wars – and by the time you get to the age of 78, you’re going to be one of those weirdo subclinical nostalgics who somehow reckons they actually fought in them. Let’s have a bit of flair! Let’s have a bit of fuck-this-for-a-game-of-soldiers! Let’s have a sense of adventure and hang the consequences! I’m sure you can see the long-term folly of thinking everything through as much as you do . . . ”

Well, you get the idea with that one. It’s notable that we now live in times where Boycott is lionised by some as an amusing character who’d do a much better job than the politicians and so on and so on. After all, the great consensus in the old days was that Boycott knew very little about entertainment and even less about leadership. The latter quality was in particularly short supply. Of Boycott’s brief England captaincy, Mike Brearley – who famously had it in spades – said: “When he took over after I broke my arm, [Boycott] won little except the recognition he was not the man to captain England.”

That was the polite way of putting it; Ian Botham made a similar point by running Boycott out during the second Test between New Zealand and England in 1978, ending another unspeakably glacial innings. “What have you done? What have you done?” Boycott demanded sotto voce of Botham, who likes to say that he replied: “I’ve run you out, you c**t.”

Strange, even in the mad post-referendum world, to think the often haplessly self-centred Boycott is now regarded as a thought leader of sorts. This latest tirade is far from the first inkling of how post-Boycott Boycott would differ from Boycott-era Boycott. The writer Tim de Lisle once observed that Ian Botham and Boycott swapped roles in retirement. Despite having been the great showman, Botham’s commentary was plodding and dreary, while the previously dour Boycott insisted on whacking every point around the ground.

Yet even accounting for this, I am not sure that the fabled disinhibition of old age is what lies behind Boycott’s political vision for the UK as delineated on GMB this week. In fact, it is rather easier to see his whole career as being of a coherent piece when you remember it is all underpinned by the same inability to think much – or indeed anywhere – beyond what suits himself.

Boycott says exactly what he pleases as long as it won’t be him getting caught out by the effects of his pronouncements. And he personally would be fine in the event of a no-deal Brexit. Yes, Geoffrey Boycott is simply looking after Geoffrey Boycott. It really was ever thus. – Guardian