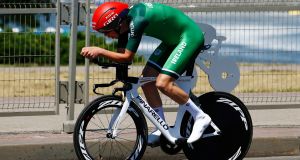 Having placed eighth in the last European Games in 2015, Ryan Mullen went four places better in Minsk, Belarus, on Tuesday, just missing out on a medal. The Irish professional cyclist finished fourth in the 28.6 kilometre time trial, a mere second off the bronze medal pace of Czech rider Jan Bárta.

“On paper it looked like a really straightforward course, but it turned out to be one of those courses that you have to keep attacking,” said Mullen. “There was a lot of recovery in corners which brought down your average a bit, so you were getting more recovery than you realised and had to constantly ride over pace.

“It turned out to be a really hard effort, and I feel like I slightly misjudged it. I went over paced in the first lap, and then I paid for it in the last 10 minutes of the race.”

Fellow Irishman Michael O’Loughlin is still an under-23 rider but nevertheless secured a fine sixth place. He was one minute 29 seconds behind Kiryienka, and was satisfied with how he went.

“It feels good, I’m really happy with sixth,” he said. “I wanted a top 10, and in that I thought I’d be ninth or tenth, but to finish sixth and close enough with the top five, I’m pretty overwhelmed with that.”

O’Loughlin is just 22 years of age and competing on the Wiggins Le Col team, a much smaller setup that his other competitors. “To have five guys who are on the WorldTour ahead of me, I’m happy with that.”

Marlen Reusser (Switzerland) beat Chantal Blaak (Netherlands) to win the women’s event. Ireland had no competitors in this contest.

Ireland have a number of competitors who will compete in the track events later this week. They begin on Thursday and run until Sunday