Michaela Walsh, Gráinne Walsh and Kurt Walker also make it through their quarter-finals 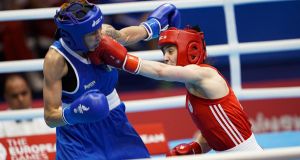 Kellie Harrington lands a left on Italy’s Irma Testa during the women’s lightweight quarter-final at the European Games in Belarus. Photograph: Soenar Chamid/Inpho

The Dubliner had a long wait to get into the ring but put in a clinical display to secure Ireland’s sixth medal. Harrington settled quickly, landing some quick opening blows on Testa to get the match underway, and an interesting battle ensued, as the two edged around each other in the early exchanges.

Harrington soon began to assert herself, though, and despite being forced to box off the back foot at stages, some key clean blows and nice combos saw her drive home to a convincing victory.

“It was a real twitchy fight. It was like a cat and mouse, but I don’t know who the cat was or who the mouse was,” Harrington said afterwards. “I felt like I was landing the cleaner, heavier shots. I felt like I won all three rounds comfortably, so I’m happy with it.

“It felt great to be back in the ring, I haven’t had a fight since February so I’m happy with the performance and I know now that my fitness is there and that will drive me on in the next fight.

There was disappointment for Aoife O’Rourke in her quarter-final bout as she lost out against tough opposition in the form of Commonwealth gold medallist and World bronze medallist Lauren Price of Britain.

Price was in control from the off, dominating the pace of the bout from the early stages, and denying O’Rourke the opportunity to assert her game plan.

O’Rourke rallied well, pulling off some nice shots, but Price continued to maintain control of the bout and ran out winner on a unanimous decision.

Earlier in the day, Michaela Walsh, Gráinne Walsh and Kurt Walker overcame their opponents to get among the medals.

Walsh was first into the ring and put on a stunning exhibition of boxing to drive home to a memorable victory that saw her knock out the current world champion and number one seed, Ornella Wahner of Germany, on a 4-1 split decision.

A close opening round saw Walsh and Wahner sizing each other up early on, with Wahner landing some hard blows in the opening stages. Walsh found her rhythm quickly though and began to dictate the pace of the fight with some quality shots landing. A cagey second round followed, as Wahner was not giving up easily, but a gritty performance from Walsh saw her take the win in style.

“I feel great, I felt a bit surprised that I had a split but obviously I was against the current world champion,” said Walsh afterwards. “It was amazing to get that win. I had a tough draw, but that’ll make winning the gold medal more worth it.

“Since she won gold in my weight my eyes have been on her – I’ve been wanting to fight her for a long time. I boxed her as a youth boxer in the semi-finals of the world championships, and she beat me by one point and stole my dream of becoming a youth world champion, so I wasn’t going to let her steal my dream of becoming a European Games champion. Thankfully I’m into the next stage now, but I’m not satisfied yet – the job’s not done yet.”

Gráinne Walsh was also in dazzling form as she stormed home to Ireland’s first unanimous quarter-final win this afternoon, with victory over European champion, Elina Gustafsson, of Finland.

Walsh dominated from the off, taking complete control of the opening round and not allowing Gustafsson to settle. A stronger second round from Gustafsson did not deter the Irish fighter as she kept her cool and delivered a polished performance, landing some key blows to see her home to glory.

“This is what dreams are made of,” a thrilled Gráinne said afterwards. “I’m actually a bit emotional, it’s a great achievement and I’m just delighted with myself. I felt my technique and my speed would be enough to beat her, I had to bite down hard – that’s two tough fights now in three days but the job is only half done now, I’m fully focused to go the full way.”

Last into the ring for Ireland in the afternoon was Walker who saw off a difficult challenge from Samuel Kistohurry of France in his men’s bantamweight quarter-final.

The Frenchman came out all guns blazing in the opening round, pushing Walker on to the back foot and dictating the pace of the early exchanges. A quick switch in style from Walker though saw him take control of the bout and he showcased his depth and strength to drive home to a unanimous decision victory.

“It feels brilliant,” he reflected afterwards. “It’s probably the first ever time I’ve fought in that style : he was too fit to keep off and he would have caught me on the back foot so I had to fight his style which I’ve never really done, so I’m just glad I tried it and won myself a medal. That’s two tough fights now, but I’m happy, I’m improving every time. Our team is flying at the moment so it’s brilliant.”

In badminton, Nhat Nguyen secured his place in the last 16 of the men’s singles and earned crucial points towards Olympic qualification as the 19-year-old beat Austria’s Luka Wraber to progress from Group F in second place.

A nervy start from the Irishman saw Wraber take the first set 21-19, but a determined and focused Nguyen recovered to take the next two sets and the game 12-21 and 14-21.

Josh Magee and Paul Reynolds recorded their first win of the tournament in the doubles, beating Estonia’s Kristjan Kaljurand and Raul Kasner. A slow start in the first set saw the Irish team trail by eight points but they stormed back to take the win 21-19. A more confident game two saw the pair then secure the victory 21-16.

Rachael Darragh fought hard in her final group game, but it was Finland’s Airi Mikkela who took the match points, winning 21-16 21-19.

Speaking after the match Darragh commented: “I knew before I came here that I was up for a very tough week, these girls are all ranked a lot higher than me in the world ranking but I just came here with the intention to leave my best performances on the court and I think I’ve done that so it’s a happy/sad kind of feeling at the minute.”

Jenny Egan has qualified for the B Final in the women’s K1 200m, finishing seventh in the semi-finals with a time of 43.427. The heats and semis of the event were within one hour of each other, and Egan knocked over a second off the time she produced in the heats earlier in the day. In the K1 200 events, the top three boats over the line in the semi-finals progress to the A Finals, with boats four to seven moving into the B Final.

Speaking after her race, Egan said: “I’m really happy to make the B Final in the K1 200m, it’s a big improvement from a few weeks ago at the World Cups. It was a good race, it was quite windy out there, quite a side wind so you had to adjust your technique to cope with the conditions. But I’m happy with it and through to the B Final of the 200 tomorrow.”

Ronan Foley finished within one second of qualifying for the B Final in his men’s K1 200 – finishing eighth in his heat with a personal best time of 38.413.