Hockey League: Five internationals get on the score sheet for their club teams 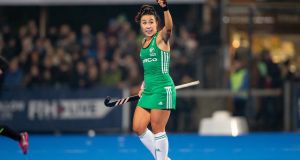 They’d have been forgiven for feeling a little weary after their January trip to South Africa, but the Irish internationals who returned to Hockey League action for their clubs on Saturday showed no signs of fatigue, with five of them getting on the score-sheet for their teams.

Anna O’Flanagan’s second quarter equaliser for Muckross against Pegasus, for whom former international Alex Speers had opened the scoring, was probably the day’s most significant score, the draw it ultimately earned, combined with Loreto’s 3-1 win over Belfast Harlequins, resulting in Pegasus being joined on 19 points at the top of the table by Loreto.

It was only the second time in the campaign that the reigning champions dropped points in a game, Loreto beating them back in November, with O’Flanagan and Sophie Barnwell both going close to winning the game for Muckross.

Goals from Ali Meeke, Lisa Mulcahy and Hayley Mulcahy gave Loreto the win over bottom club Belfast Harlequins while Nikki Evans and Deirdre Duke kept Old Alexandra in third place, three points behind the top two, with the scores in a 2-1 defeat of Pembroke Wanderers. Pembroke made a tight finish of it, though, when Hayley O’Donnell pulled a goal back for them in the final quarter. Former international Audrey O’Flynn made her Hockey League debut for Alexandra having focussed on her Irish rugby career the past few years.

UCD moved up to fourth in the table with a 2-1 win over Catholic Institute at Belfield, Michelle Carey getting the deciding goal in the fourth quarter. Before then Lena Tice had given the students the lead from a short corner after just two minutes before her Irish team-mate Róisín Upton levelled for Institute with a penalty stroke.

Cork Harlequins, meanwhile, picked up just their second win of the season, Emma Barber and Cliodhna Sargent both firing home from corners to give them a 2-0 win over Railway Union.