Before Patrick Mahomes was a star, the Chiefs could see how bright he’d shine 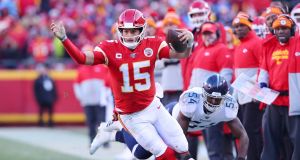 Kansas City Chiefs quarterback Patrick Mahomes runs on his way to scoring a 27-yard touchdown in the second quarter of the AFC Championship game against the Tennessee Titans at Arrowhead Stadium in Kansas City, Missouri. Photograph: Tom Pennington/Getty Images

In 2017, the Kansas City Chiefs traded three draft picks to move up 17 spots and take Patrick Mahomes with the 10th pick of the NFL draft, but as a rookie, he played in only one game, a throwaway appearance on the season’s final weekend. Mahomes’s workload did not portend the risky, bold move to come.

Three weeks after their season ended, the Chiefs agreed to trade their veteran quarterback, Alex Smith, who had just led Kansas City to the playoffs, so they could replace him with Mahomes, then 22 years old.

Two years later, with Mahomes propelling Kansas City to its first Super Bowl berth in 50 years in Sunday’s decider against the San Francisco 49ers in Miami, handing him the team’s most pivotal job seems, in retrospect, a slam dunk.

But was it that simple? Five other quarterbacks taken as high, or higher, than Mahomes in the 2017 and 2018 drafts – Mitch Trubisky, Josh Rosen, Baker Mayfield, Sam Darnold and Josh Allen – have not achieved the same kind of early success or compiled the luminous statistics that Mahomes has. Those quarterbacks may not have as much talent surrounding them as Mahomes has had on the Kansas City roster, but Mahomes, perhaps as much as any player, is responsible for much of his success.

But were there doubts about Mahomes as a rookie? Looking back, what do the Chiefs remember about his season as an apprentice? Did his quick ascension seem preordained?

Brad Childress, the Chiefs’ assistant head coach in 2017 and a long-time NFL offensive coordinator, said in a telephone interview this week that the common projection is that every first-round pick, regardless of position, has roughly a 50 per cent chance of meeting the expectations that come with such a lofty selection.

“It’s always a leap of faith,” Childress said. “But Pat threw about 700 passes at Texas Tech and we watched every one of them. Not once, but several times. We knew what we saw and knew it was something special. “But yes, you still had to get him in the building. And then what, right?”

Before Mahomes hit the practice field at training camp in 2017, where all eyes are always on the most recent first-round draft choice, there was a more subtle, less observed evaluation of Mahomes going on throughout the organisation, as well as a mentoring process that few new quarterbacks receive.

Childress compared the education of Mahomes to what the Philadelphia Eagles offered Donovan McNabb in 1999 when Childress and Andy Reid, now the Chiefs’ head coach, were with that team. “We explained to Pat that he had to be there at 7am and that he had to be the first one in every morning,” Childress said. “It was important for the rest of the people on the team to see him working hard before they would respect what he was trying to become.”

Mahomes was also fortunate that Smith magnanimously welcomed his heir apparent and tutored him for countless hours. “Patrick couldn’t have paid Alex Smith enough for what he learned in the quarterback meeting room day after day,” Reid said. “He absorbed so much, and maybe the best of it was not in terms of Xs and Os. It was more about how you go about your business as a leader on an NFL team. Because people are always watching the quarterback.

“Some young quarterbacks start the games as rookies, and I get that approach, but I think Patrick took a bigger step forward watching and learning from Alex than he would have by playing as a rookie.”

In time, though, Mahomes had to perform on the field in the team’s summer training camp.

As the second-string quarterback, Mahomes went against the Chiefs’ first-team defence, a part of practice that is devoted to the defence working on its cohesion, and in theory, at least, displaying its dominance. The first-team offensive stars would usually be working at another part of the practice facility, but as safety Daniel Sorensen said this week: “People stopped to watch Pat.”

Reggie Ragland, a linebacker for Kansas City, said that five minutes into Mahomes’s first practice, he dropped back, scrambled about three yards to the left and threw a no-look pass that no one saw coming. “It gained something like 15 or 20 yards,” Ragland said Wednesday, snickering at the memory. “Guys were saying to each other: ‘Did you see that? Did he do that?’”

Childress, who worked with the offense, said he would be standing on another field during practices, watching his first string. Reid would walk past and quietly say, “When you’re watching tape later, make sure you look at plays three, eight and nine from the defensive period.”

Later, when practice was over, Childress and the other offensive coaches would queue up the plays and frequently watch them two or three times. It reminded them of the Texas Tech tape they had watched. Mahomes would run sideways, his eyes watching a receiver run across the field, then suddenly throw the ball to a completely different area of the field.

Brett Veach, the Chiefs’ general manager, said watching the Mahomes practice tape became “like a phenomenon” at training camp, with coaches and executives running back to the team’s dormitories to do so.

To say the least, the Chiefs were heartened by the potential of their top draft pick, but Smith threw for more than 4,000 yards in the 2017 season. Mahomes never saw the field until the regular-season finale, after his team had clinched its playoff spot but could not move up in the conference standings. Mahomes led the Chiefs onto the field at Denver before 75,928 amped-up fans on New Year’s Eve, 2017.

“We were lucky to get a peek at him going against the real thing in the NFL,” Reid said. “Do you ever really know without that?”

Mahomes completed 22 of 35 passes for 284 yards and led the Chiefs to a late game-clinching rally. Moreover, some of his play resembled film from the training camp practices.

“He wasn’t unnerved at all, it was just Pat throwing it downfield, throwing it sidearm, underhand, eyes closed, you name it,” fullback Anthony Sherman said. “He did whatever he wanted to do.”

After the game, Reid conceded he had seen the same kind of eye-opening throws when Mahomes was at Texas Tech, then added: “But to be able to transfer it here to this level that quickly? There’s not a lot of guys that can do that.”

In the Denver lockerroom, Von Miller, the defensive leader of the Broncos and one of the game’s great players, said something prophetic. “Hats off to that kid,” Miller said. “He’s the quarterback for the future of the Chiefs.” – New York Times