Tipping Point: Separating the player from their toxic personal views is a tough call 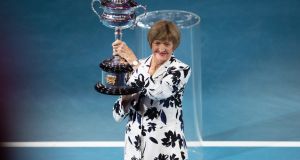 It would be so much easier to honour Margaret Court if she was a stereotypical 77-year-old granny. But she isn’t. The Australian sporting icon has repeatedly voiced homophobic opinions and her objection to same-sex marriage. Decades ago she said she was impressed by South Africa’s apartheid regime, a rotten statement that appears never to have been fully disowned.

But Court is also the most successful grand slam champion in tennis history. Half a century ago she became the first woman in the open era to win all four major tournaments in a single year. Court is an epochal figure in all of sport.

So last week she was honoured at the Australian Open in an anniversary ceremony that wound up shining a spotlight on the conundrum of whether the player can – or should – be separate from the person.

Two other seminal tennis figures, Martina Navratilova and John McEnroe, are adamant it’s a package deal. They demanded that the Australian Open tennis arena in Melbourne named after her is rebranded to honour another local, Evonne Goolagong.

As bigoted, ignorant and hurtful as such statements are, one thing Court can’t be accused of is insincerity

She is an indigenous Australian who won seven grand slams in the 1970s. Navratilova described Goolagong’s credentials in terms of being a role model who has led an exemplary life off-court as well as being a champion on it.

Not surprisingly, the woman at the centre of the storm despaired at a failure to discriminate between her stellar career as a tennis player and her subsequent role as a Pentecostal minister. Court takes a literal view of the bible and has claimed gay marriage is corrupt and increases LBGT tendencies in children. She has also evoked Hitler and the devil in relation to gay parenting.

As bigoted, ignorant and hurtful as such statements are, one thing Court can’t be accused of is insincerity. She has been staunch in her beliefs for decades and been prepared to voice them publicly. For that she feels she has been persecuted in a way that’s been portrayed through the prism of being denied her right to free speech.

It’s a clever position. It’s often much easier to argue for the right to say what you think rather than examine the actual merits of what you say. But it’s also much easier to defend free speech when agreeing with someone. The real test of the principle is advocating it in the face of stuff you are appalled by.

Navratilova wrote last week about how stadiums, streets and buildings should be named after heroes

The inevitable counter-charge against those who preach inclusivity and tolerance is that it often appears to include and tolerate only certain viewpoints. McEnroe’s derision of Court for her history of offensive comments didn’t prevent him observing that she is tennis’s “mad aunt”. It’s hardly the most poisonous of jibes but was a careless insult nonetheless.

Humming underneath it all is how offence is subjective. What offends one person can be very different to how someone else sees it. People choose to be offended, an important consideration in a context where an emotion such as hate gets legislated for with all the shifting subjective complexity wrapped up in that.

Navratilova wrote last week about how stadiums, streets and buildings should be named after heroes. She gave a list of “appropriate” examples such as Muhammad Ali and Nelson Mandela. But neither of these men were always straightforwardly heroic, something often forgotten in retrospect but which, to their credit, neither of them ever did.

She also argued it would be appropriate if the Staples Centre in Los Angeles was renamed in memory of Kobe Bryant. If feelings on the tragic death of the basketball star are still raw, some might still reflect on how such an honour for someone who never escaped the shadow of a sexual assault complaint might feel very inappropriate indeed.

The reality is that moral exemplars are as rare in sport as anywhere else. Presuming an outstanding athlete must be exceptional ethically too is infantile. In fact, actively embracing the concept is often a cynical commercial conceit. Talent and decency aren’t a package deal. Some of sport’s most skilled were also its most shitty.

For the majority of us, Court’s personal views on same-sex marriage and gay rights are offensive fundamentalist nonsense. Yet no can dispute how her achievements as a player continue to stand the test of time.

So last week Tennis Australia faced the dilemma of whether or not accomplishment can be separated from the individual. By most accounts they handled a tricky balancing act with understated skill. In fact they were probably busy congratulating themselves on having got the chore out of the way when Navratilova and McEnroe undertook their protest.

Of course, there’s a much wider perspective to the quandary of separating the talent from the person. Art is crammed with a beauty created by bastards. Does revulsion at how Michael Jackson reportedly abused children mean never dad-dancing to Rockin’ Robin again? In fact, the breadth of such an issue makes the matter of naming an arena after Margaret Court relatively straightforward.

That’s because freedom of speech doesn’t entitle anyone to freedom from consequence. Whatever distinction Court wants to make doesn’t prevent the naming of any arena from being interpreted in a broader context than just sport.

We know very well how such titles can be a declaration of intent from any sports organisation. They reflect the self-image a sport wants to portray and how it wants to be perceived. The name on a stadium comes loaded with associations and such associations aren’t always straightforward. We know that only too well in Ireland.

Continuing to honour Margaret Court the player by naming an arena after her inevitably comes with the baggage of Margaret Court the individual. That’s hardly the message and image Tennis Australia wants to project to the world. An unapologetic Court is entitled to her views. But she can hardly expect them to be consequence-free.