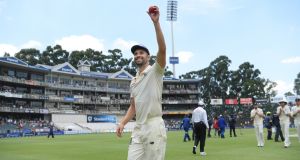 The third innings in a match such as this can be a bit dull. A ballast of 217 runs after declining to enforce the follow-on usually results in hours of relative tedium as an insurmountable lead is harvested.

But it did not quite work out like that at the Wanderers as England lost wickets at regular intervals long before they had disappeared over the hill and far away. The whole point of not enforcing the follow-on is to bat the other side completely out of the game. But that was not their obvious gameplan.

At the close England had been bowled out for 248, their lead a very healthy 465. But they did not reach this destination in the approved manner. At one point they were 160 for six as Joe Root watched his middle-order batsmen come and go as if it was somehow a formality that they would set a massive target via an array of swishes outside the off-stump. The pitch is still pacy but fundamentally true, so a big lead was required.

The young openers were the least culpable of the batsmen. Zak Crawley was caught behind defending; Dominic Sibley flicked on the legside again and this time he was caught at midwicket though these dismissals did not happen until the pair had posted another half-century partnership. A couple of players are looking jaded and distracted at the crease and in need of runs to keep the hounds at bay. Joe Denly is one of those and his luck was out; an inside edge on to his pad ended with the stumps disturbed.

By contrast Ben Stokes and Ollie Pope were in magisterial form but both succumbed to extravagant drives. Jos Buttler, however, is in that distracted category and ill at ease at the crease. After one sumptuous back-foot drive he, too, swished – though not in his case not through over-confidence – and there was an air of resignation as he departed. Sam Curran, on a king pair, was not circumspect for long. Nor was Mark Wood.

Meanwhile Root remained at the crease until partnered by the last man, Stuart Broad. The captain fell to the catch of the day by Faf du Plessis, diving spectacularly to his right at slip. Throughout the second half of his innings Root looked as if he might be playing himself out of form especially when he tried a range of one-day shots. But at least he managed to stay there long enough to post his third and scratchiest half-century of the series.

South Africa’s most economical bowler was Vernon Philander but that was because he spent most of the afternoon in the dressing room or having a scan. It was not a great day for Philander, a reminder that it is practically impossible for cricketers to choreograph their farewell from the international stage – though Alastair Cook and Henry Blofeld have managed this quite well recently.

For the third time in succession Philander was out in the first over of the morning session. Later he would leave the field with a dodgy hamstring after bowling only nine deliveries; then to cap his miserable day he learned that he had gained one demerit point, which will not inconvenience him greatly since he is retiring from international cricket, but he has also lost 15 per cent of his match fee in his final game for South Africa after giving Buttler a send-off on Saturday. Ah, well. Next stop on his cricketing journey is Taunton in early April, not a great place for dodgy hamstrings.

After Philander’s dismissal batting actually looked more comfortable for the South African batsmen than at any other time in their innings. Quinton de Kock reached his half-century from only 72 balls with some silky strokeplay. Alongside him Dwaine Pretorius was well organised and he drove strongly when given the opportunity.

This pair had added 79 together when Stokes intervened. He found a little extra bounce and Pretorius’s edge was neatly caught in the gully by Crawley. In the next over Wood delivered the best ball of the morning. Bowling round the wicket, he got a full-length delivery to nip off the pitch and trim the bails of De Kock after passing through his gate. Wood celebrated with the broadest of smiles for De Kock has been the most treasured South African wicket in this series, an accolade unlikely to be overtaken by Dane Paterson, who now swung lustily; Buttler caught the edge and Wood had his second five-wicket-haul in Test cricket.

The return of Wood as a force in Tests is one of several boons for England on this tour. It may be that he will join a list of English pacemen who had fleeting but significant careers. That list is obviously headed by Frank Tyson; it might include Simon Jones, Dean Headley and the more distant Nobby Clark and Ken Farnes. In the best of all possible worlds Wood might take too many wickets to qualify for this list.

His success here opens up possibilities. Through excellent management and personal dedication he has managed to prepare himself for Test cricket so effectively that he has been close to his best in the past two Tests without playing any red-ball cricket for 11 months. Once this was regarded as impossible.

As for England’s next overseas tours perhaps he could play one Test in Sri Lanka, a couple in India and three in Australia. Who knows? Currently he gets into the best side when fit. In the future he might line up alongside Jofra Archer occasionally and dovetail with him more frequently. His continued presence in the squad would be a blessing to players and spectators alike as he invariably brings a smile to Test cricket. - Guardian

July’s British Open at Royal St George’s is cancelled 15:36
Club World Cup to be proposed as alternative to Champions Cup 13:33
German clubs resume training amid tight virus restrictions 12:17
Report says PGA Championship is rescheduled for August 12:12
All in the Game: Capello plumps for Calamity James over Joe Hart 10:20
Here is your handy guide to sport on television this week