Duo both land bronze at the paracycling world track championships 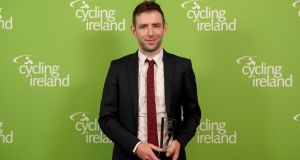 Irish cycling is celebrating two further medals at the paracycling world track championships in Milton, Canada, with two bronze medals secured on Saturday evening adding to the silver medal clocked up by Katie George Dunlevy and Eve McCrystal on Friday.

The first of the two bronze medals went to Ronan Grimes, who qualified third-fastest by a slender margin in the afternoon’s C4 pursuit qualification, then improved on his time in Saturday evening’s final ride-off.

Grimes had set a personal best when recording a time of 4 minutes 45.045 earlier on Saturday, just 0.149 ahead of fourth-placed rider Jason Macom (USA).

The fatigue from the earlier effort normally mean riders are slower in the final but, showing his determination in the battle for bronze, Grimes improved on his earlier time by over a second.

He covered the four kilometre distance in 4 minutes 43.806, some 0.731 seconds faster than Macom. The medal adds to the silver medal he took in the scratch race in last year’s paracycling track worlds.

“So I knew I was in for a hard ride. But luckily I delivered on the plan we had set out for the afternoon, my laps were a lot smoother and more consistent. I am delighted to come away with that medal in what was still a very tight ride.”

Grimes’ performance shows he is on track for this year’s Paralympic Games in Tokyo. “We have put an awful lot of work in to the pursuit specifically from October, and to go away with this bronze medal leading into the next preparation for the Games is a big confidence boost,” he said.

“It will just give me that drive to push on that bit more and aim for a step or two higher for the Games.”

“I didn’t really expect it. I just said to myself I was going to try to stay on as many wheels as I could,” she said. “Coming up to the last kilometre, it felt like there was way longer to go. I just saw the American girl go so I said, ‘I’ll just give it everything to try to follow her.’ Nobody came around me, so that was brilliant.”

She said that her quick improvement in the sport gives her confidence for the Tokyo Paralympics. “Last year I got pulled in…I got lapped three or four times, I think. So now, this year, to see that I am beating the girls who were so far ahead of me last year is really good.”

In addition to being a stand-alone medal event, the scratch race also represented the fourth round in the women’s C3 Omnium discipline. Timothy finished 5th overall in that.

Their time of one minute 10.248 seconds was just under three seconds off the bronze medal performance.

In the men’s tandem kilometre event, Martin Gordon and Eamonn Byrne took a solid tenth. Their time of one minute 3.747 seconds was slightly over four seconds off the gold medal, and just over two seconds away from bronze.

Damien Vereker and Marcin Mizgajski were 18th and Peter Ryan plus Anthony Walsh were 19th. Earlier, Chris Burns finished ninth in the fourth round of the men’s C2 omnium, the 15km scratch race.

He ended the four-race competition a solid eighth overall. Elsewhere, Lucy O’Donnell was best-placed of the Irish riders in action at the world cyclo-cross championships in Dabendorf, Switzerland, on Saturday.