Offaly native was one of six riders to progress to the second round of the 1.60m competition 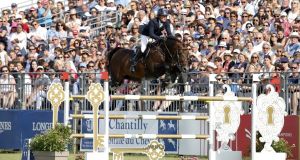 The Co Offaly native was one of six riders to progress to the second round of the 1.60m competition and, while first to jump, was the fastest of five to record a double clear. Kenny landed the first prize of €99,000 when stopping the clock on 37.54 with Ann Thompson’s 13-year-old Cornet Obolensky stallion Balou du Reventon. The host nation’s Penelope Leprevost finished second on Vancouver de Lanlore (38.08) with Belgium’s Nicola Philippaerts placing third on H&M Chilli Willie (38.13).

“My horse was super the whole way along the course,” said Kenny, “and then to the last fence, I went really fast and I don’t think he knew what was happening. I thought I had a distance but I didn’t and he really saved me.”

This first Longines Global Champions Tour Grand Prix win for Kenny means he has now qualified for the end-of-season Super Grand Prix Final, something which he is delighted to achieve at this stage of the season: “Yeah that was really important to me. I had thought about it a lot and I really wanted to qualify and preferably early rather than later so at least I got that out of the way.”

Allen and Ehning represented Valkenswaard United at Chantilly but, with a fence down on Friday, had to settle for second place behind the Berlin Eagles duo of Christian Kukuk (Limonchello) and Ludger Beerbaum (Cool Feeling) who completed the two days on a score of zero.

A member of the Irish team which won bronze on Friday, Derwin jumped five clear rounds over the course of the championships with the Irish Sport Horse gelding AHG Whiterock Cruise to win the gold medal on a penalty score of 1.26.

As she did when winning a team gold at the 2017 European pony championships, Derwin sang Amhrán na bhFiann from the top step of the podium.