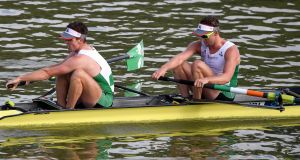 UCD’s four and the Skibbereen pair of Mark O’Donovan and Shane O’Driscoll missed out in the Henley Regatta on Saturday. Photograph: Detlev Seyb/Inpho

Commercial gave Thames a fine race in the semi-final of the Thames Cup at Henley Royal Regatta, but came up just short.

The eight from Dublin were one of three Irish crews to exit on the penultimate day, with UCD’s four and the Skibbereen pair of Mark O’Donovan and Shane O’Driscoll also losing out.

Commercial’s feat in coming from well down to beat French opponents on Friday had alerted Thames to their worth. The English club, the defending champions, took a lead of just under a length, and twice - at Fawley and coming into the Enclosures - had to cover strong pushes by Commercial, who challenged hard coming right to the line and were beaten by half a length.

“They read every push; countered everything we did,” said Commercial coach Dermot Keogh.

There will be Irish interest in the final, as the number three man in the Thames boat is Conor Walsh, a former UCD clubman.

The current UCD four came up against the prospective Britain four for the World Under-23 Championships in the semi-final of the Visitors’ Cup. The British unit looked very good. They expanded a small lead out to a length by half way and from there left their lighter rivals behind.

Martin Feeley, the UCD coach, said it was a miracle that UCD had made it so far in an event which featured rowers who are, effectively, current internationals.

The Argentina pair of Agustin Diaz and Axel Haack ended the challenge of O’Donovan and O’Driscoll.

The early part of the race looked good for the Skibbereen men, and they led by about half a length at the quarter-mile mark. But Diaz and Hack, at a lower rating, were not being burnt off. Just after Fawley, with half the course completed, they drew level. They kept motoring and moved away to win.

O’Donovan and O’Driscoll are set to be part of a Skibbereen/Cork Rowing Club eight which will compete at the Irish Championships next weekend. Reigning champions Commercial will be favourites, but UCD have pushed them hard this season - and gone unbeaten in the fours.

Feeley’s thoughts were already on the upcoming battles. “We have to refocus for a week’s time,” he said.

His Visitors’ four are the Irish champions. Feeley said he saw nobody taking the title off this crew. Commercial may, again, be the main threat.